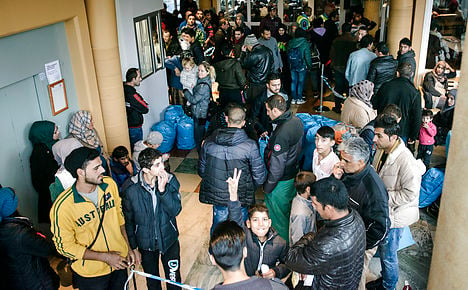 A crowded Swedish Migration Agency office in Malmö. Photo: Simon Skipper/Scanpix
Sweden's Prime Minister Stefan Löfven released a written statement on Wednesday asking the European Commission to push other EU member states to do more to help tackle the refugee crisis.
“Sweden has long taken an unreasonably large responsibility in comparison with other countries in the EU, and now we are in a very tight position. It is time that other countries now take responsibility and therefore the government requests the redistribution of refugees from Sweden,” he said.
But Löfven will get no help from neighbouring Denmark, Danish Foreign Minister Kristian Jensen said on Thursday.
“Every country has chosen its own course within the refugee area. They have chosen theirs and now they must deal with it as they’d wish,” Jensen told TV2 News.
“We know that there are some countries that are looking to Denmark and we know that Sweden has also looked to Denmark to find inspiration. That is probably the best help we can give them,” Jensen said.
The EU has already launched a refugee relocation programme designed to move refugees from overstretched frontline states. Denmark, due to its EU opt-out, refused to formally take part in the relocation plan but voluntarily agreed to take an additional 1,000 refugees.
Sweden recently doubled its refugee forecast for 2015, with up to 190,000 new arrivals expected on Swedish soil before the end of the year.
Denmark, meanwhile, received an all-time one-month record of refugees in October with around 3,500 but the 9,793 people who sought asylum in Denmark during the first nine months of 2014 is only slightly above the 9,124 asylum seekers who came to Sweden in last week alone.
The Danish government has attempted to discourage refugees by placing advertisements in Lebanese newspapers warning that the country has recently halved the level of benefits received by asylum seekers.
Swedish anti-immigration party the Sweden Democrats has been inspired by Denmark's campaign to do the same, as has the Norwegian government.