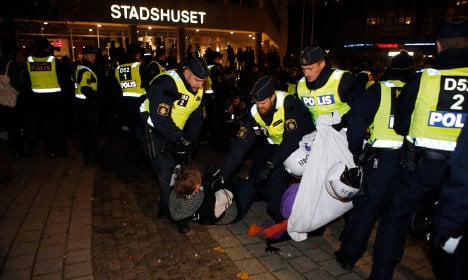 Police had previously told Swedish media that around 40 Roma people sleeping outside the building in the southern Swedish town were staging a peaceful “demonstration” and were initially taking no action.

But on Wednesday evening some 100 officers arrived to remove mattresses and cardboard boxes brought to the site by the group, saying they were causing the area to become cluttered with litter. However, the demonstration was allowed to continue.

“We will take care of the items and confiscate them under the public order act. But they are being given the opportunity to take care of their things themselves and make sure they are removed,” police spokesman Lars Förstell told the TT newswire.

A 25-year-old pregnant woman from Romania, named only as Samantha, was one of those getting her mattress confiscated.

“The police just showed up. I'm going to have to sleep in the park now,” she told TT. At around 6.30pm officers began to drag a number of people from the scene using force. Four were arrested in the scuffle. But police said the action was not caused by the migrants but by other Swedish activists supporting their cause.

“It's the last thing we want to do. We have communicated to make sure this doesn't happen, but they have not wanted to participate and instead oppose us,” said another police spokesman, Robert Loeffel.

Around 100 people remained outside Malmö city hall at midnight on Wednesday. More Roma people had joined the scene, but it was not clear how many of the total 100 were local protesters. Police guards remained at the scene throughout the night. Photo: Jon Willén/TT

The migrants were among around 200 people – mostly Roma people from Romania and Bulgaria – who had been staying at a controversial shanty town in an industrial area of Sweden’s third largest city.

The camp was cleared on Tuesday amid concerns that it posed a health risk both to those staying there and neighbouring residents.

The migrants are legally allowed to stay in Sweden as they are EU residents. Sweden’s Prime Minister Stefan Löfven joined the debate on Tuesday, arguing that the responsibility for ensuring that they had roofs over their heads remained with Romania and Bulgaria, where most of them are from.

“They are of course welcome to come here and spend some time here, but in the long run their own countries have to ensure they get work, education and a place to live in their country,” said the Social Democrat leader.