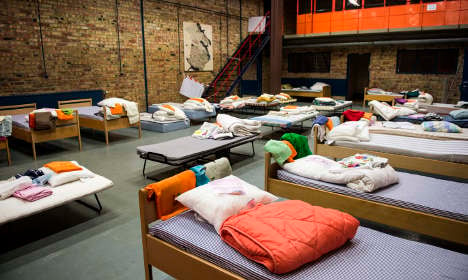 Temporary accommodation for asylum seekers in Stockholm. Photo: Pontus Lindahl/TT
Sweden is struggling to provide enough beds for the record number of refugees crossing into the country from Germany and Denmark, the government confirmed on Thursday.
At a press conference, Migration Minister Morgan Johansson told reporters that there was no longer a guarantee that all asylum seekers could be offered emergency accommodation.
“We are in in a very dramatic situation, it has become even more dramatic in recent days. Last week we saw a decline, but now the past few days, we see an increase,” he said, referring to the ongoing arrival of refugees fleeing war-torn nations to seek new lives in Sweden.
“The urgent problem today is that the number of asylum seekers is increasing faster than the number of accommodation places. Sweden today can no longer guarantee accommodation places,” he added.
“Those coming to our borders may well be greeted by the news that we can not arrange accommodation. They may then decide to either arrange accommodation on their own or go back to Germany or Denmark,” he said.
Sweden's Migration Board (Migrationsverket) said earlier on Thursday that more than 2,000 asylum seekers were expected to try to travel to Sweden from Rostock in northern Germany, which would have meant a new daily record.

Sweden's Migration Minister Morgan Johansson. Photo: Pontus Lindahl/TT
Johansson's announcement comes just a day after Prime Minister Stefan Löfven released a written statement calling on the European Commission to push other member states to do more to help tackle the refugee crisis.
“Sweden has long taken an unreasonably large responsibility in comparison with other countries in the EU, and now we are in a very tight position. It is time that other countries now take responsibility and therefore the government requests the redistribution of refugees from Sweden,” he said.
Last month the Scandinavian nation doubled its refugee forecast for 2015, with up to 190,000 new arrivals expected on Swedish soil before the end of the year.
The country's Migration Board has recently sent out a number of appeals to Swedish businesses and residents asking for volunteers to help provide shelter for the rising numbers of migrants crossing into Sweden as the winter draws in.
Hundreds of asylum seekers are already being put up at the world's most northerly ski resort in Lapland and at a remote holiday park in west Sweden, while sports halls, theatres and disused schools have also been transformed into temporary homes.
But Anke Erdmann, a Green Party state parliament member for the north German state of Schleswig-Holstein told The Local that plenty of refugees in the Rostock area were also sleeping on “camping mats in empty market halls” and other disused buildings.
“The problems they've described affect us too, of course I can understand Sweden's problem, but it's the same in Rostock, Lübeck and Kiel,” Erdman said.
Erdmann added that German estimates suggested 1,800 refugees were stuck in northern port city Rostock trying to get tickets to Sweden, with the Nordic nation only offering tickets to 50 or 60 people each day – down from 150 last week.
Meanwhile, between 600 and 800 people are believed to be waiting to travel to Sweden from Schleswig-Holstein's state capital Kiel under similar circumstances.