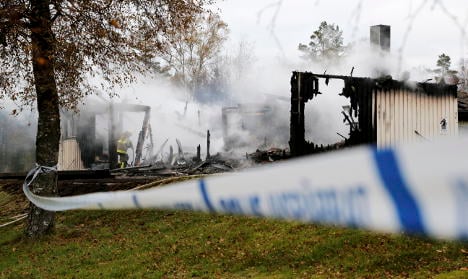 A fire at asylum accommodation in Munkedal in October. Photo: Adam Ihse/TT
As Sweden continues to take in record numbers of asylum seekers, one of the side effects has been growing numbers of attacks on housing that is supposed to be keeping safe those who have fled war-torn countries to seek new lives in the Nordics.
More than a dozen fires at refugee housing were reported during the first 10 months of 2015, most of which are understood to have been started deliberately. While surveys suggest that the majority of Swedes support their country's open approach to helping refugees, there are rising concerns about a vocal, violent minority that are literally using flames to fight their corner.
“It is very serious,” Swedish Prime Minister Stefan Löfven told reporters following one of the most recent attacks in Munkedal in south western Sweden at the end of October.
“It is not the Sweden we want to see.”
Now, an app developer in the famously tech-savvy nation has offered a potential solution to the problem.
Trygve, which has already helped dozens of security firms and neighbourhood watch groups to alert one another to suspicious activities since it launched in March this year, is offering to connect all buildings currently housing asylum seekers to its technology for free.
“Many of us have had enough of the recent fires on asylum accommodation. Police and local authorities are doing what they can, but it's not enough,” Per Källgården, Trygve's CEO, told The Local.
“The problem is that up until now the security companies and police are typically there after 15 minutes. Criminals are very fast, it can take just five minutes for a break-in (…) police will not be available in that time so it makes sense for people in the area to know when something happens,” he said.

A publicity shot for the app. Image: Trygve
The app works in two key ways.
Firstly, accommodation owners, businesses and residents can apply to join locally organized mobile groups where they can share information about anything suspicious going on in their community. So, for example if an unknown van shows up on a usually quiet street, neighbours can inform one another and track the vehicle's movements. According to Källgården, residents in parts of Stockholm have already foiled a number of potential burglaries and stopped a potential teenage suicide by using the technology to communicate with one another.
Secondly, anyone living in Sweden can download the app, without joining an online community group, and will still automatically receive alerts if alarms go off at buildings linked to Trygve's technology. The app uses GPS, so for example Stockholmers visiting Gothenburg for the weekend would get local updates rather than information on what's going on back in the Swedish capital.
“This is technology which makes it easy for people to collaborate (…) or just be informed,” explained Källgården. Per Källgården, Trygve's CEO. Photo: Trygve
The move has already been given a cautious welcome by city council officials in Stockholm, where the majority of the 10,000 people who have already downloaded the app from Apple and Google Play are based.
“The app itself is rather good. It is used by a group of business owners in Södermalm and by others in the old town. They communicate a lot when they want to prevent pickpockets and burglaries. They write down warnings and things like that,” Krister Sundgren, one of the city's two crime prevention coordinators, told The Local.
He said it was “too early to say” whether Trygve could be used specifically to prevent arson attacks, but noted that “the people running them and in the [mobile] groups will probably feel safer”.
But he flatly rejected the idea that the technology could be creating a rising fear of crime in Sweden, where robbery and arson rates are well below the EU average.
“Sure Sweden is rather safer than some places but I think people like these groups and the opportunity to communicate (…) Safety is a feeling. You can feel safe when there may be a lot of crime in the neighbourhood or unsafe when there is not so much crime.”

A publicity shot for the app. Image: Trygve
Trygve's offer to help asylum accommodation providers comes amid ongoing debates about whether or not the location of refugee housing should be made public. Some municipalities, such as Umeå in northern Sweden, have opted to keep precise locations secret as part of their efforts to prevent attacks.
But Källgården insisted on Thursday that his firm's technology would remain useful even if addresses did not enter the public domain.
“Chances are the people living in that area will know (…) but if they don't that's when the general alert becomes useful if something goes wrong.”
Sweden recently doubled its refugee forecast for 2015, with up to 190,000 new arrivals expected on Swedish soil before the end of the year.