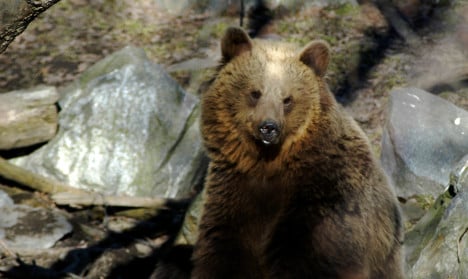 A Swedish brown bear (not the one in this story) Photo: Hasse Holmberg/TT
Police confirmed that the animal was killed by hunters in the village of Dalby, near Uppsala, at around 2.30pm.
The shooting took place after the bear was sighted on several occasions in different parts of the county and residents became worried that they could get attacked.
“It has been on farms in the area and was deemed to be dangerous to humans,” Christer Nordström, a press spokesman for the force told Radio Sweden (Sveriges Radio).
Dalby is situated in Uppsala county, around 80 kilometres north of Sweden. It is home to roughly 600 people. Another bear was shot dead in the same region in 2012.
Bear attacks are incredibly rare in Sweden, where there have only been two fatalities caused by the animals over the last century.
However, two Swedish hunters made headlines in August after they were attacked by their own prey and ended up in hospital.
Under Swedish law it is legal to hunt bears during the autumn and in recent years this has been actively encouraged to help control growing numbers of the creatures.
But the practice was met with criticism when the Swedish Species Information Centre announced earlier this year that the brown bear is once again at risk of becoming extinct, after previously dropping off the centre's annual 'red' watchlist.
The centre reclassified the brown bear as an endangered species, citing hunting as the primary cause of the declining population.