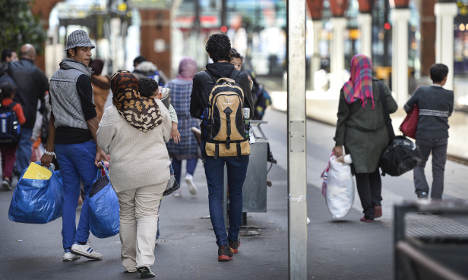 Refugees arriving in Malmö in southern Sweden recently. Photo: Anders Wiklund / TT
The latest figures from Migrationsverket show that 10,201 people applied for asylum in the Nordic nation last week.
This group included 4,333 refugees from Afghanistan and 2,719 from Syria.
More than a quarter of the asylum seekers were unaccompanied minors, with 2,827 children making the journey to Sweden without an older relative or guardian.
The new statistics were released days after Sweden's Migration Minister Morgan Johansson announced that due to the huge recent influx of refugees, the Scandinavian country could no longer guarantee beds for all new arrivals.
“The urgent problem today is that the number of asylum seekers is increasing faster than the number of accommodation places,” he said at a press conference on Thursday.
“Sweden today can no longer guarantee accommodation places,” he added.
READ ALSO: Swedish parties reveal temporary asylum visa plan
Prime Minister Stefan Löfven also released a written statement last week calling on the European Commission to push other member states to do more to help tackle the refugee crisis.
“Sweden has long taken an unreasonably large responsibility in comparison with other countries in the EU, and now we are in a very tight position. It is time that other countries now take responsibility and therefore the government requests the redistribution of refugees from Sweden,” he said.
In October the Scandinavian nation doubled its refugee forecast for 2015, with up to 190,000 new arrivals expected on Swedish soil before the end of the year.
Sweden's politicians agreed in a cross party deal earlier this month that temporary three year visas would be introduced in 2016, rather than the permanent ones presently given to those who are granted asylum.
Sweden currently offers among the most generous and open refugee policies in Europe. While charities have reported record donations in recent months from Swedes keen to show their support, polls suggest the anti-immigration Sweden Democrat party is now backed by around 20 percent of voters.