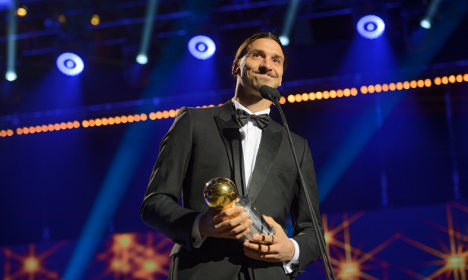 The Swede is the Nordic nation’s top striker of all time and also became the all-time leading goal scorer for his club side Paris Saint-Germain last month.

He was honoured at an awards ceremony in Stockholm on Monday night, with Swedish goalkeeper Hedvig Lindahl taking home the ladies' Diamond Ball.

Both prizes are handed out to Swedish players annually for their performances on the pitch. Ibrahimovic's win was his 9th in a row and his tenth in total since 2005. He was handed his award in Stockholm by another legend, former Portuguese footballer Luis Figo, who is married to a Swede.

But the trophy win was unsurprising for the footballer himself, who predicted future Golden Balls (known as 'guldbollen' in Swedish) at the ceremony in 2014.

“Last year, I promised to come here to collect my tenth Golden Ball. I don't know if I can promise the same thing for next year. But this makes me think of my time as a junior football player in Malmö. I used to sit in the locker room, looking around, and thinking: 'To succeed I have to be ten times better than everyone else',” the striker told the audience at the awards gala held at the Globe Arena.

“But if feels like I have already managed that. There is no more to say. I have made history again and again. I hope someone else gets to experience what I have experienced. The joy can't be described. Many thanks to all who have been following me from day one,” he said. Ibrahimovic will find out if he is still in the running for an even bigger Golden Ball award later this month. He is one of 23 players nominated for the Fifa Ballon d'Or, which is handed out each year to the player considered to be best in the world over the past 12 months.

The shortlist of candidates for the Ballon d’Or will be released on November 30th, ahead of a ceremony in Zurich on January 11th.

In the meantime, the footballer is busy preparing for two crucial all-Scandinavian games against Denmark in the Euro 2016 play-offs, starting on Saturday.

He will also be back in Sweden later this month for his club side PSG's next clash with Malmö FF in the Champions League.

The forward grew up in the southern Swedish city and played for its home club in 1994-2001. He revealed last month that he was booking an entire square in Malmö to ensure that football fans could watch the game.