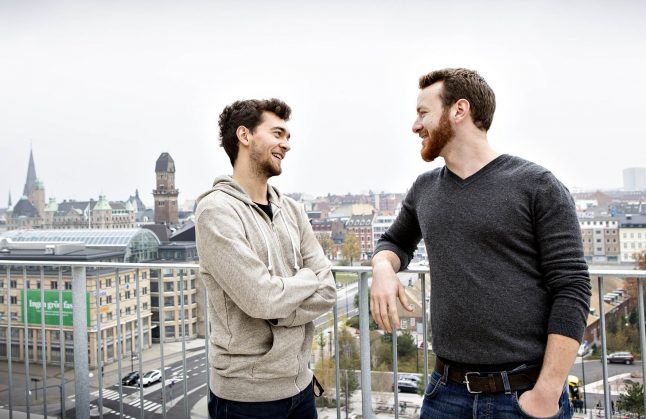 Fabian Eckert from Munich, Germany, and French-born Luke Sims, who studied at bachelor’s level in the United Kingdom, are new-found buddies after both enrolling in the Master in Leadership for Sustainability programme at Malmö University.

Having moved to the city in August, their newly-arrived eyes offer a fresh take on life as an international student in Malmö.

Sitting in the café in the campus’ centre-piece new building, Niagara, Fabian explains:

“It was way better than I expected. I thought that Malmö was just an industrial city which was not that nice; the old city area is okay, but that is not what Malmö is about. This new area here is so beautiful, and it is really modern.” Fabian, who now lives with his girlfriend in private accommodation, spent his first few weeks living in his van on the beach while he searched for a place to live.

“The beach is the best place,” he exclaims. “Every morning I got up at 7am, jumped into the sea, and then had a shower, and after I could just walk to university.  And it is a proper beach too, really nice!”

Luke adds: “It was a surprise for me too. We were there in September, but I wouldn’t have expected to be in Sweden and swimming at that time of the year.  I did one year of studying in Florida, and the weather was different for sure, but the beach was pretty similar.”

But now as winter looms, the guys are increasingly retreating to the city’s bars, choosing the student-friendly area of Möllan as their stomping ground.

“It’s like the centre of the city and everyone gets there easily,” comments Fabian, as Luke nods his approval.

“There are a lot of bars there and the beer is generally cheaper there too,” the French student adds.

“It is very relaxed and pretty chill. You feel like if the evening is going well then it would be easy to just go and talk to people. I think that is something I really like about Malmö; it is easy to get to know people.”

“There are a lot of students in Möllan, so that is mainly who you socialise with,” says Fabian. “I really think that in Malmö you don’t really feel like a foreigner because it is so international, you always see people from everywhere and you never get the feeling that you are the only person who is new in the city.”

It has not taken them long to work out the best ways to save money; Luke favours seeking out small, family-owned cafes rather than corporate chains because the coffee is better and you tend to get free refills. Fabian soon discovered the fruit and vegetable market in Möllan for bargain shopping. “You really feel like you’re in a different country there, everyone is running around shouting about what they’re selling and if you go one hour before they close, it is even cheaper,” Fabian confides.

It is Malmö’s strong international identity which has also given rise to its reputation as one of the best places in Sweden to eat falafel.

“It is the best thing in Malmo; you can buy the cheapest falafel on earth here!  I eat about two or three a week!”

The city’s location adjacent to Copenhagen is also a great advantage.

“For travelling, being so close to Copenhagen is great. Having a capital airport so close to Malmö makes getting in and out really, really easy,” Luke explains.

The guys have pin-pointed where the best second-hand shops are, the cheapest and best places to get food and coffee, and when the normally-expensive bars have their happy hours. But both agree that there is more to living in Malmö than the inner city.

Just a short train journey can land students in the region’s picturesque countryside, nature reserves and sandy beaches. Both Luke and Fabian have taken advantage of the Swedish law ‘allemansrätten’ (the everyman's right) which allows anyone to spend a night, with certain restrictions, on both public and private land.

Read also: Why Malmö has it all for international students

“Because it is the south of Sweden the weather is not going to be as extreme as other areas. We could go to the beach in September, and at the beginning of October we went camping next to the sea and it was fine,” Luke reflects.

“The countryside is beautiful around here. We’ve been camping a few times, and we went to the south coast near the city of Ystad, that was really nice,” agrees Fabian.

The city’s reputation as one of the most bike-friendly cities in the world is also a golden factor in their student lives.

Fabian says: “We cycle everywhere, and I love it – it is one of my favourite things about the city.”

“I was in Gothenburg recently, I saw people cycling up a hill, we laughed about that, you could see how much they were struggling, but here it so flat, it is so easy,” adds Luke.

The students agree they have no regrets. Whether you’re looking for beaches, bikes, or falafel, they agree, Malmö is the place to be.