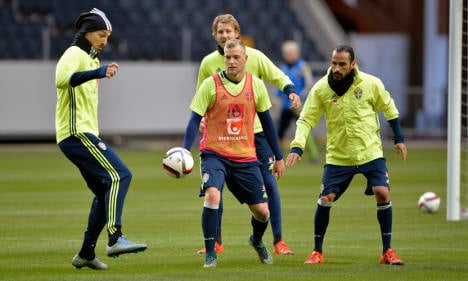 The Swedish squad training in Stockholm this week. Photo: Anders Wiklund/TT
Denmark and Sweden, linked by the Öresund Bridge (or the Øresund as the Danes call it) spanning the water from Copenhagen to Malmö, have plenty of previous experience facing each other in the European Championship.
Denmark won Euro '92 in Sweden, but only after losing to the hosts in the group stage, while a 2-2 draw between the sides at Euro 2004 in Portugal took them through to the quarter-finals at Italy's expense.
Then there was the Euro 2008 qualifier in Copenhagen in 2007 that was abandoned after a Danish supporter ran on to the pitch and attacked the German referee who had just awarded Sweden a penalty and sent off Denmark's Christian Poulsen for a punch on Markus Rosenberg.
In total the two sides have played each other 104 times. Sweden have won on 45 occasions, Denmark 40 times, and there have been 19 draws.
With Sweden's Zlatan Ibrahimovic fresh from winning Sweden's Golden Ball award and having scored nine goals in six league games for Paris Saint-Germain, Erik Hamren's side will be hopeful of taking a lead into the return.
Zlatan who is Sweden's top scorer in history told global media last month that he was aware the playoffs would be difficult.

“In these games, it is all or nothing and each team gives 200 percent but I am sure we will qualify,” he said.

Denmark, meanwhile, will be without Hannover midfielder Leon Andreasen after he cut his hand with a knife opening a parcel and needed an operation.
“It pleases me that we get the opportunity to decide it all at home,” said Danish coach Morten Olsen after the draw was made.
Elsewhere in Scandinavia, Norway is preparing to take on Hungary, which had been poised to qualify automatically as the best third-placed team until a late Turkey goal in the 89th minute of their final match took them through instead.
That was agonising for a country with a rich footballing history but which hasn't been to a major tournament since the 1986 World Cup.
However, Hungary have another chance to progress as they face Norway over two legs, with the first game in Oslo on Thursday.
“We feel we know Hungary well, and know what to expect,” said confident Norway coach Per-Mathias Hogmo after naming his squad.
In other ties, a diminished Republic of Ireland hope to emerge from the first leg of their Euro 2016 qualifying play-off away to Bosnia-Herzegovina on Friday with their chances of reaching the finals still intact.
Meanwhile, Ukraine will host Slovenia in Lviv on Saturday before the return in Maribor next Tuesday.
The four play-off winners will join the 19 other qualified nations and the hosts France in the finals draw in Paris on December 12th.