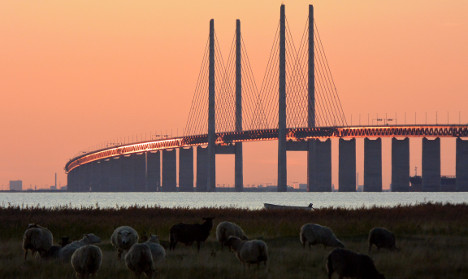 The Öresund bridge links Malmö in Sweden and Copenhagen. Photo: Johan Nilsson/TT
Police and other emergency services are set to swing into action and respond to a fake planned nuclear catastrophe in the Kattegat waters between Denmark and Sweden this week. The ideas is that authorities will learn from the simulation in order to help keep Nordic residents safe should anything similar happen in real life.
According to a press release from the East Jutland Police, “a collision between an nuclear-powered ship and a large cargo vessel will be the sounding gun for a chain of events that will create problems for all of society”.
More than 500 participants from 30 different public authorities and organizations will take part in the crisis training exercise, dubbed KRISØV, which is the largest of its kind in Denmark's history.
Only the Danish National Police (Rigspolitiet) and the Danish Emergency Management Agency (Beredskabsstyrelsen) know the full details of the planned “catastrophe”, which will take place on Wednesday and Thursday.
Read more Danish stories on The Local Denmark
Meanwhile people living in Malmö in southern Sweden have been warned to watch out for scenes set to resemble a Hollywood blockbuster movie if they travel over the Öresund bridge to neighbouring Copenhagen.
Police in the Danish capital have announced that officers will be engaged in a full-scale operation to train their tactical and operational response to terror in the city and test new technologies.
“The exercise will take place somewhere in Copenhagen where one might hear gun shots in some areas. But you shouldn’t be worried. It is just an exercise and only blanks will be fired,” a spokesperson wrote on Facebook.
Police did not give exact details about the nature of the excercise but said that the Copenhagen Fire Brigade, rail operator DSB and civilians would also be a part of the operation. In addition to hearing gunshots, Copenhagen and Malmö residents might also notice helicopters flying above the two cities, as well as some slight traffic disturbances, officials added.
Helle Kyndesen, the head of the East Jutland Police, said the exercises would provide excellent opportunities for testing police and public responses.
“We look forward to participating because it is important that our crisis management functions effectively and that each and every one of us are confident with our responsibilities, assignments and roles,” he said.
The Swedish capital is also holding its own separate military exercise on Wednesday and Thursday. Hundreds of soldiers from the Lifeguards unit (Livgardets krigsförband) will be seen marching through the city centre and travelling on Stockholm's subway, while others will be conducting drills in Lill-Jansskogen, a park on the island of Djurgården.