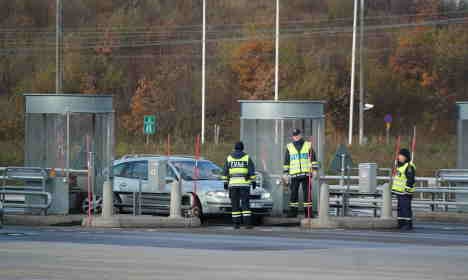 Police in southern Sweden began on Thursday at noon to implement controls at the country's southern borders, following an announcement by Anders Ygeman, Minister for Home Affairs, on Wednesday evening.

At 12.39pm officers stopped a train arriving at Hyllie station in Malmö to check passengers' identification documents. Police were also checking papers at at terminals for ferries arriving from Denmark and Germany.

The checks, which come at the request of Sweden's Migration Agency, will continue take place on the Öresund Bridge and the ferry terminals in southern Sweden and apply initially for 10 days, after which they could be extended in 20-day periods.

The introduction of border controls means that refugees coming to Sweden face three choices: to return to the country they came from, seek asylum in Sweden or, for those just passing through Sweden, to choose a different route to their final destination, explained police bosses at a follow-up press conference on Thursday at noon.
In practice, it means that police may stop and check the identity of anyone crossing Sweden's borders, which they are normally only allowed to do if there is a suspicion of any criminal activity. But not everyone will be stopped and checked, said Patrik Engström, head of the police's border unit.

“We're not going to control all who are travelling across the border, but there is going to be a mainly randomized selection,” he said.

“There are certain traffic intensive areas, like the Öresund Bridge, where we cannot check everyone,” he added about the bridge which sees around 20,000 cars travel between Sweden and Denmark every day. Mikael Hvinlund and Anders Ygeman at a press conference on Wednesday. Photo: Henrik Montgomery/TT
The Schengen open borders agreement saw border controls abolished between most EU countries, and travellers can move between them without showing their passports.
However, the agreement does allow a country to reinstate controls temporarily if there is a serious threat to its “public policy or internal security.”
Sweden's decision, which applies only to people entering the country by road, rail or sea in southern Sweden, follows similar moves by Germany and France earlier this year.
Earlier on Wednesday, Danish Prime Minister Lars Løkke Rasmussen said his country, the main transit land for refugees coming to Sweden, would tighten its refugee policies in an attempt to reduce numbers.
Responding to Sweden's decision to introduce border checks, he later told Danish Radio: “We have a good relationship and I don't perceive this to be any kind of unfriendly act.”
Rasmussen added, however, that Denmark will not follow Sweden's lead and introduce border controls.
“It would with certainty mean that we would have more, not fewer, asylum seekers in Denmark,” he told TV2 News, saying that Denmark would have to either register any asylum seekers stopped at its national borders or send them back where they came from.
He added that Sweden might see its asylum numbers actually rise from the border control decision.
“It can mean that some of those who had an ambition of travelling on to Finland or Norway will now instead give their asylum applications to Sweden,” he said.
Denmark's asylum figures pale in comparison to Sweden's. Last week, Sweden saw its highest ever number of refugees over a seven-day period with 10,201 asylum applications. The one-week figure tops the 9,793 asylum seekers that Denmark received throughout the first nine months of 2015.
See also: Weekly asylum claims top 10,000 in Sweden
Sweden is one of the European countries under greatest pressure in the wake of the refugee crisis, receiving more asylum seekers than any other country, relative to its size. Up to 190,000 people are expected to claim asylum in Sweden in 2015, more than twice as many as previously predicted. Refugees arriving on the ferry from Rostock to Trelleborg. Photo: Marcus Ericsson/TT
Less than three weeks ago, the Social Democrat-Green coalition government reached a hard-fought deal with the four main centre-right opposition parties, under which Sweden would introduce temporary residence permits for most refugees, replacing the standard permanent residency previously offered.
Asked whether the Greens, the Swedish party with the most liberal migration policy, backed the latest move, Ygeman said: “The government stands united behind the government’s decision – there is no alternative.”

Green Party migration spokeswoman Magda Rasmusson said in a statement that the border checks “do not mean that the right to have your asylum case heard has changed for those who come here.”

The main opposition Moderates, which have recently toughened their line on asylum, said the latest move would be insufficient.

Speaking to SVT, leader Anna Kinberg Batra said steps were needed to make sure that those who did not have a right to stay in Sweden are sent home. She said she was willing to initiate new talks with the government: “We need to get better order in an unsustainable situation,” she said.