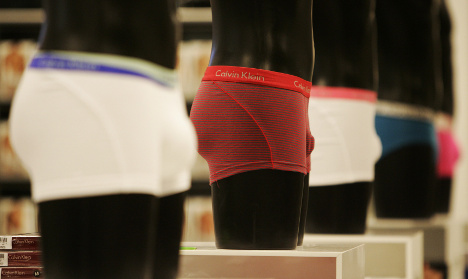 Male underwear that is irrelevant to this story. Photo: Lefteris Pitarakis/TT/AP
Elisabeth Massi Fritz shared the unusual exchange that took place on her own Instagram account.
“Victims of rape must stop being blamed. A rape is not about clothes, alcohol etc etc but about the rapist. I asked the perpetrator to describe their underpants in detail during an interrogation and was asked what significance this was for this case. My answer was 'as important as my client's thongs' Mr Chairman,” she wrote.
Her post continued: “Struggling with these goals and working hard to change attitudes in the courtroom.” Elisabeth Massi Fritz. Photo: Private
Massi Fritz made the comments last week, but they went viral after Swedish tabloid Expressen reported on her campaign.
The lawyer – who has worked with victims of rape and sex attacks for more than 24 years – told The Local on Tuesday that she was fed up with watching her vulnerable clients being quizzed about their clothes.
“Neither string panties nor underwear are of any significance (…) yet questions are allowed,” she said.
She explained that she was concerned that if this kind of approach continued in Swedish courtrooms, people would become too afraid to go to police or give evidence.
“Many victims of rape do not dare report the crime to police. They are afraid to talk about reality as it is traumatic. They are afraid of being questioned, slandered and contested,” she said.

A photo posted by Advokat Elisabeth Massi Fritz (@advokatmassifritz) on Nov 5, 2015 at 8:06am PST

Swedes have a global reputation for having a more relaxed attitude towards casual sex than some other nationalities and for promoting gender equality. But Massi Fritz argues that when it comes to sexual behaviour women are still viewed in a different light in the Nordic nation.
“We need to change the distorted attitude that says women do not have equal rights with men. That women who are drunk, dress a certain way or voluntarily go home with an unknown man, reading between the lines, have themselves to blame,” she told Expressen.
Sweden currently has the highest rape rate in Europe. However this is partly because the country records allegations in a different way to most other countries, tracking each case of sexual violence separately. So for example if someone says they were raped by a partner every day for a fortnight, officers will record 14 potential crimes. Elsewhere, many countries would log the claim as a single incident.
Last month the first centre in the world specifically designed for male victims of rape opened in the Swedish capital.