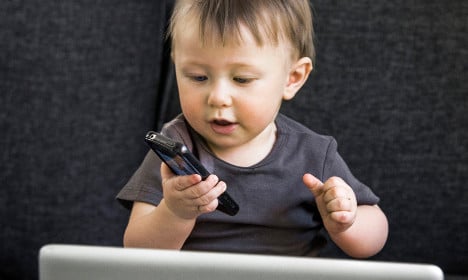 A child, perhaps updating his Facebook status. Photo: Claudio Bresciani/TT
Hashtag teddybear.
A new study has revealed that Swedish two-year-olds are big users of the internet.
Indeed, 67 percent of two-year-olds use the internet, 32 percent daily, and a third to occasionally create their own content, according to new statistics published by the Internet Infrastructure Foundation (Stiftelsen för Internetinfrastruktur).
“This ties in a lot with tablets, I think,” Pamela Davidsson, a statistician at the group, told the Aftonbladet newspaper.
“It was when they came in a few years ago that the little kids started to use the net more.”
The report found that 2015 showed marked increases in net usage across all ages, with 93 percent of Swedes having access to the internet, and 91 percent using it.
The study found that daily use of the internet has increased across all ages, which is not surprising considering 92 percent of the population has a computer.
Indeed, for the first time, more Swedes have access to the world wide web than to a computer, thanks to the growing popularity of tablets and smartphones.
Around eight hours of a typical Swede's 21 hours of weekly internet is spent on a mobile phone.
Elsewhere, social media use is growing, with 77 percent of Swedes visiting social networks, compared to just 53 percent in 2010.
Seventy percent of Swedes use Facebook, 40 percent use Instagram (compared to 28 percent last year), and Twitter and LinkedIn are both used by 22 percent of Swedes.
The study noted that online film viewing figures have “exploded” over the past year, with 70 percent of internet users watching movies online (compared to 52 percent last year). Just two out of five film viewers pay for the experience.