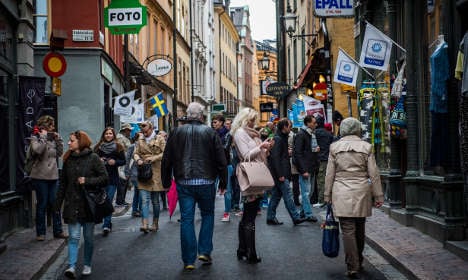 A prognosis by Stockholm county authority's department for growth and regional planning presented on Thursday suggests that the region will grow to 2,582,000 residents by 2024 – approximately a fourth of Sweden's entire population of almost 10 million.

It would mean another 38,400 people, on average, would move to or be born in the capital region every year in the coming decade.

“Generally the figures are very positive for the Stockholm region. We have been a slightly too small a region to seriously compete for talents and big investments in Europe,” Gustav Hemming of the Centre Party, county councillor for regional issues, told the Svenska Dagbladet newspaper.

“But with 2.5 million residents we go from being a small region to a medium-sized big city region and that's a boost,” he added.

Thursday's figures follow an estimate by the Stockholm Chamber of Commerce last month, which suggested that the population in the city itself would rise by 11 percent to 1,012,488 by 2020, topping the list of Europe's fastest growing places.

“We are really happy and optimistic about this population growth because it creates more of a critical mass in Stockholm which will help us in the global market moving forward,” Maria Rankka, CEO of Stockholm Chamber of Commerce, told The Local at the time.

However, there are concerns that the city's infrastructure would need to be improved in order to accommodate the rising numbers of people moving to what is already the largest urban hub in Scandinavia.

“The big challenges will be to manage construction of housing and public transport infrastructure,” said Hemming.

Some 211,000 homes are set to be built in Stockholm county by 2024, to cope with the housing shortage, a source of heated debates within the business and political communities.

“The housing market is a bit tricky but there is help to be had,” Julika Lamberth, Business Development Manager for Stockholm Business Region, a state-funded company working to make Stockholm the leading sustainable growth region in Europe, told The Local last month.

She said that the organisation was constantly consulting with businesses and international professionals in the city to analyse the problem. This includes stepping up efforts to link tech firms with local municipalities and real estate companies in the area.