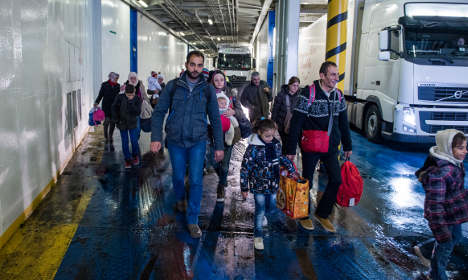 Refugees arriving in Trelleborg on the ferry from Germany. Photo: Marcus Ericsson/TT

Sweden announced on Wednesday that it would implement temporary border controls for an initial ten-day period that could be extended in 20-day periods. It followed similar moves by countries such as Germany and France – which Sweden had so far resisted – and came after a formal request from the Migration Agency which said it was no longer able to guarantee shelter for refugees.

2. Is Sweden closing its borders?

No. People will not be prevented from entering Sweden as long as they are carrying a valid passport or ID documents. But it does mean that refugees now face three choices: to return to the country they came from, seek asylum in Sweden or, for those just passing through – usually en route to Norway or Finland – to choose a different route to their final destination.

3. How is it going to affect refugee numbers?

Prime Minister Stefan Löfven said that the reason behind the temporary checks is to restore “order on our borders” in a country which is expected to receive up to 190,000 refugees in 2015. But some experts claim that it could actually increase the number instead.

“Paradoxically, those who do not want to seek asylum in Sweden and are perhaps heading to Finland or Norway will be forced to find another route past Sweden. Then there's the risk – or chance – that they seek asylum in Sweden instead. Then the border controls are going to have the opposite effect,” Robert Hårdh, head of human rights organization Civil Rights Defenders, told the Svenska Dagbladet newspaper on Thursday.

4. How exactly do the controls work?

The Schengen open borders agreement saw border checks abolished between most EU countries, and travellers can move between them without showing their passports. However, the agreement does allow a country to reinstate controls temporarily if there is a serious threat to its “public policy or internal security”.

In practice, it means that police may stop and check the identity of anyone crossing Sweden's borders, which they are normally only allowed to do if there is a suspicion of any criminal activity. Sweden has implemented temporary border controls before, for example following the terror attack on Norway's Utøya island in 2011.

5. How will it affect tourists and commuters?

First of all, remember to bring your passports or, if you are an EU citizen, your national identity card if you are crossing the border. Nordic citizens are still allowed to cross the border without a passport, under a passport free zone agreement separate to Schengen, but must be able to identify themselves as such (so, bring your documents).

If you're one of the more than 30,000 commuters travelling across the Öresund bridge between Malmö and Copenhagen by car and train every day you are likely to face some delays. But only randomized controls will be carried out; it would be near impossible to check everyone in such a traffic intensive area.

“We're working together with the police and hope things are going to run as smoothly as possible,” Öresund Bridge press spokesperson Sanna Holmqvist told the TT newswire on Thursday.

6. How are Sweden's neighbours reacting?

Danish Prime Minister Lars Løkke Rasmussen said his country would not be following suit. “It would with certainty mean that we would have more, not fewer, asylum seekers in Denmark,” he told TV2 News. But he added that he did not consider Sweden's decision “an unfriendly act” towards his country.

Meanwhile, Norway's Prime Minister Erna Solberg welcomed the decision. “If it means that you can better control those who arrive, that's for the better,” she told the Expressen tabloid.