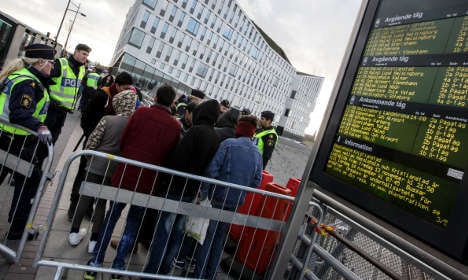 Some 15 police officers boarded a train at Hyllie station in Malmö, the first stop on the Swedish side of the bridge from Denmark, shortly after noon. At least 30 refugees, with small children, were asked to get off the train to formally apply for asylum in Sweden.

Over the course of Thursday afternoon, around 20 Iraqis arriving by train to Malmö and ferry to Helsingborg turned back to Denmark.

“They lacked permits to be in the country and did not want to seek asylum,” Leif Fransson of the southern regional police told the Dagens Nyheter newspaper.

Regional public transport operator Skånetrafiken urged people to allow plenty of time for travelling as heavy delays were expected. But eye witnesses reported that the ID checks were being carried out in a relatively calm and swift manner, taking no more than a few minutes.

Press spokeswoman Ewa-Gun Westford said the controls required a large police presence. She told the AFP news agency: “We will try to be on all trains, at least to start with, and then we will have to make an assessment (…) We are in a situation today where we assess this operation hour by hour.”

Meanwhile, in Germany, around 60 people had to return to their asylum transit accommodation in Rostock after they were denied tickets for the ferries to Trelleborg in Sweden because they did not have passports, reported the Dagens Nyheter newspaper. Police carrying out checks on the train from Denmark to Sweden. Photo: Stig-Åke Jönsson/TT

Swedish police officials said on Thursday that they were preparing to have the controls in place for six months, though Sweden has made no such request yet.

READ ALSO: No, Sweden is not closing its borders

Authorities have also expressed concern about the large number of unaccompanied minors arriving in the country – 23,000 have arrived so far this year, a sharp rise from previous years.

“We don't have control over the unaccompanied minors,” Migration Agency spokesman Mikael Hvinlund said. “Children are disappearing every day now, it's not acceptable.” The checks came after Sweden reinstated border controls on Thursday in a bid to gain control over a massive influx of migrants arriving in the country, without blocking a steady flow of asylum seekers.

People arriving in Sweden without valid identification documents will be allowed to seek asylum, but those who do not want to do so – for example those who simply want to transit through Sweden – will be refused entry.

“This is not a fence. We need to make sure that we have control (…) We have to make sure we know who is coming to Sweden,” Prime Minister Stefan Löfven insisted.

“Introducing border controls is not to prevent people from coming to Sweden to seek asylum,” the head of the Swedish Migration Agency Anders Danielsson meanwhile told Swedish news agency TT.

“On the contrary. They will have their case heard, but we need to (regain) control,” he added. Sweden, a country of 9.8 million people, has taken more refugees as a proportion of its population than any other country in Europe as the continent struggles with its biggest migration crisis since the Second World War.

The Scandinavian country expects to receive up to 190,000 asylum seekers this year – the equivalent of 1.5 million people arriving in a country the size of Germany, and more than double the 80,000 it took in last year.

The massive influx has strained Sweden's capacity to take care of the new arrivals, with authorities recently warning they were no longer able to provide housing for them.

“We are not fulfilling our mission, which is to offer a roof to everyone (…) Re-establishing border controls can help us,” he said.