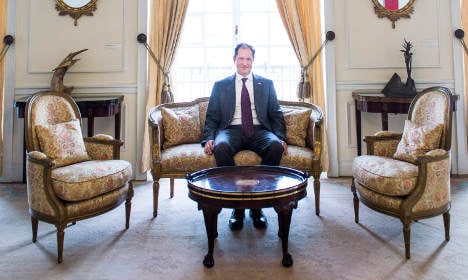 Former ambassador Mark Brzezinski. Photo: Nora Lorek/TT
Sweden's US embassy has been without an ambassador since Mark Brzezinski left in the summer, following his four-year stint in Stockholm.
His replacement Azita Raji was nominated in October last year, but is yet to be designated, much less confirmed by the US Senate.
So what's taking so long?
It's not a problem with Raji, an Iranian born politically appointed ambassador who was a financial supporter of the President Obama's. Rather, it's the result of political wrangling in the US Senate.
Republican Senator Tom Cotton has frozen three ambassadorial nominees – including for Sweden and Norway – pending an investigation into the Secret Service, which in an unrelated issue leaked unflattering information about another Republican lawmaker.
“This is about a constitutional clash between the executive and the Legislature,” Cotton said recently, reported US news site Politico. “In divided government, one critical check that the Senate has is the power of confirmation.”

Politico reports that there are eight ambassadorial nominees waiting to be confirmed and over 100 “languishing in committee”.
But as far as Sweden is concerned, it means there has not been a permanent head of the embassy since July. And Raji can't start unless she's confirmed by the Senate.
And what is worse, if the nomination period expires, it is possible that Sweden would be without a US ambassador until after the 2017 elections in the US.
Mark Cameron, the spokesman at Sweden's US embassy, declined to comment on the effect of having no ambassador, but said operations were being carried out under the watch of Chargé d'Affaires Bob Gilchrist.
“We are carrying on, moving forward, and strengthening bilateral relations between Sweden and the US, while working to protect and promote the interests of the US,” he said.
Cameron refused, however, to say anything else about the fact that the position has been left glaringly vacant after it had been kept so warm by a series of active and successful ambassadors. The US Capitol Hill. Photo: AP Photo/Jacquelyn Martin
Erik Brattberg, a Swedish foreign policy expert based in Washington, says the US Ambassador to Sweden is a “very important” position.
“The ambassador allows the embassy to interact with the Swedish government at the right level – and it's important for them to have a direct link to the White House and the State Department. It's not only symbolic, it's important for both Sweden and the US,” he told The Local.
“Without an ambassador, it makes it more difficult for Sweden to interact with the US as there is no go-between.”
“On the practical side, it's more difficult for the US embassy in Sweden to take the lead on issues, as they don't have a head with the authority in Washington to push things and move the ball forward on new initiatives.”
He added that any new ambassador would have big shoes to fill, too.
“Mark Brzezinski will be missed, anyone would have a hard time matching what he accomplished. And don't forget, there's only a year left of the Obama administration, meaning anyone coming to Sweden wouldn't stay for very long anyway. There would be a lot of limits on what they could accomplish.”
“What I'm hearing is that most of the nominees won't be confirmed in time before the new administration, meaning Sweden wouldn't have a US ambassador for up to a year.”
“The relationship between Sweden and the US is strong and has been strengthening in the past few years. It will continue to be strong even without an ambassador, but with an ambassador they could do even more together.” Republican senator Tom Cotton. Photo: AP Photo/Danny Johnston
Elizabeth Walentin, an expert on US politics working as a PR consultant in Stockholm, says that the hold up in the Senate doesn't look good when it comes to the relations between Sweden and the US.
“What we're seeing here is political gamesmanship in the Senate taking priority over public diplomacy,” she told The Local.
“Sweden is an important trading partner for the US, we have a refugee crisis, we have a climate  issue. This isn't just a cushy post – there are vital issues to be discussed between the two countries.”
“You have to ask, what kind of signal does this send to the Swedes?”
Walentin was quick to add that having no ambassador was likely a much more significant problem in other countries that have been held up in the Senate's wrangling, such as Trinidad or Mexico.
“It must be especially frustrating for these other countries. The nominees being presented are not controversial, they are serious people who could do a good job. What we see are senators trying to make life difficult for Obama, who is already in his lame duck period.”
“It's a waste of time and resources. You've got to wonder what anyone gets out of this. These tactics are reminiscent of Frank Underwood in 'House of Cards'.”
“This kind of gamesmanship would be more understandable  if Obama was newly elected. They're trying to make him look weak and ineffective, but it makes no sense.”
“And it would be a shame for Sweden if the appointed ambassador doesn't come. She is an inspirational woman, she came from Iran and moved to the US as an adult. It's the kind of immigrant success story that would be great to show off here.”
But as it stands now, the fate of Raji and the occupancy of the Stockholm ambassadorial residence remain in the hands of the US Senate, where Senators don't look like giving way any time soon.