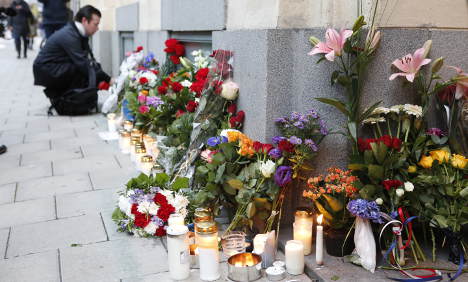 People leaving candles and flowers outside the French embassy in Stockholm on Saturday. Photo: Christins Olsson/TT

Swedes, members of the French community in the capital, ministers and ambassadors gathered in the Sergels Torg square in central Stockholm on Saturday to show solidarity with France.

The French Ambassador was there, as was Education Minister and Green Party leader Gustav Fridolin, alongside several other officials who had come to pay their respect to the victims.

Together they joined in a moving rendition of French national anthem La Marseillaise.

“Yesterday it felt awful to be abroad. I just wanted to be with other Frenchmen, other Swedes, other people to get strength. I am speechless,” he told the TT newswire. Earlier in the day it was revealed that one Swede had died in the attack on Friday night, which killed more than 120 people, and another was injured.

“We think of the victims and their relatives, of parents who have lost their children. One Swede is dead and we have information that another Swede has been wounded in a shooting. We are in touch with their families,” the Social Democrat leader continued.

He later signed a book of condolences at the French embassy in Stockholm. Several other figureheads in Sweden also paid tribute to the victims and expressed their condolences, including King Carl XVI Gustaf.

“I am shocked at the terrible events in Paris. I feel great sorrow and my thoughts go to all affected, the victims and their relatives. These deeds are an attack on our common society and our way of life. Many of us feel concerned and alarmed. It is important that we stand united in the face of this unbelievable terrorism,” he said in a written statement.

The leader of Sweden's Alliance opposition, Anna Kinberg Batra, told TT: “I reacted with shock and horror and grief over the incident, as I believe many did. And we're seeing now that the entire world is reacting. This is an attack that partly naturally hits the victims and their relatives, and partly our entire society.”

Sweden's Foreign Minister, Margot Wallström described the violence as a “a living nightmare” and called for the EU to stand united against terrorism.

“We will persecute and punish those who are guilty,” she said, adding that leaders would work to be “even more effective in the fight against terrorism and anti-democratic forces”.