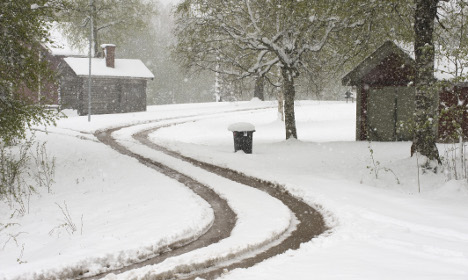 The Swedish Meteorological and Hydrological Institute (SMHI) said that snow was heading towards the regions of Värmland, Dalarna and Jämtland in western Sweden, alongside strong winds.

It issued a class one warning, the lowest of three types of warnings given to people in Sweden in the face of extreme weather events. Residents were asked to be vigilant when driving or when out walking in affected towns and cities.

WEATHER: Check the forecast wherever you are in Sweden

Those living on Sweden’s east coast were also told to be careful, as cold temperatures nipped Swedish shores.

Forecasters said that up to 10cm of fresh snow could fall in some areas by the end of Monday.

Parts of northern Sweden have already been coated with snow, the first of which fell as early as September.

But so far much of of southern and central Sweden, including Stockholm, has yet to get even a dusting of snow this winter.

However, long-term forecasters have predicted that Sweden is in store for an “extreme winter” with even colder temperatures than usual in the coming months.

READ ALSO: Why I can't wait for a proper Swedish winter