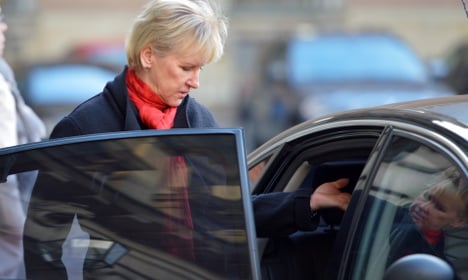 Margot Wallström ended up in hot water after she told Swedish broadcaster SVT that the decades-old conflict in Palestine was a factor of radicalization in the Middle East, hours after Friday's terror attacks in Paris.

Her remarks were slammed as “appallingly impudent” by the Israeli foreign ministry.

“Whoever fatuously attempts to create a link between radical Islamist attacks and the current problems between Israel and the Palestinians is fooling himself, his people and international opinion,” it said in a statement, as The Local reported on Monday.

But Löfven, who heads up Sweden's centre-left Social Democrat-Green coalition, hit back on Tuesday, saying the criticism levelled against the foreign minister was unfair.

In a comment to the TT news agency he described her remarks as “long and proper reasoning about what creates terrorism and that people are drawn to these movements. It is not linked to criticism of Israel. It is a legitimate discussion.”

Despite Wallström never actually outright mentioning Israel in the interview with SVT, she also found herself on the receiving end of sharp criticism on home turf on Tuesday.

“The foreign minister's attitude to Israel is well known, but it would have been an appropriate opportunity not to connect Israel to what happened [in Paris],” Jan Björklund, head of the Liberal Party, told TT.

Wallström made her remarks after she was asked by a Swedish journalist if Sweden and other countries should worry about the rise of extremism, saying: “Yes, it is clear that we have reasons to worry… to see that there are so many people who have become radicalized.”

“And once again we return to situations like that in the Middle East, especially (concerning) Palestinians who think: there is no future for us, we must accept a desperate situation or resort to violence.”

Her press secretary Pezhman Fivrin told the Aftonbladet tabloid on Monday that they were working to clarify her comments to its Israeli counterpart, saying she had been misunderstood and that the minister had not meant to make the link.

“It is really important to us to put forward the message that it was a misunderstanding,” he said.

It was however not the first time that Wallström has been accused of linking the Israeli-Palestinian conflict to the bolstering of radical movements in the Middle East.

Last year, after Sweden's recognition of the state of Palestine infuriated Israel, she said: “We want to contribute to creating more hope and belief in the future among young Palestinians and Israelis who might otherwise run the risk of radicalization in the belief that there is no alternative to the current situation.”

Israel's foreign ministry said Wallström “has consistently demonstrated bias against Israel and exhibits genuine hostility when she indicates connection of any kind between the terrorist attacks in Paris and the complex situation between Israel and the Palestinians”.