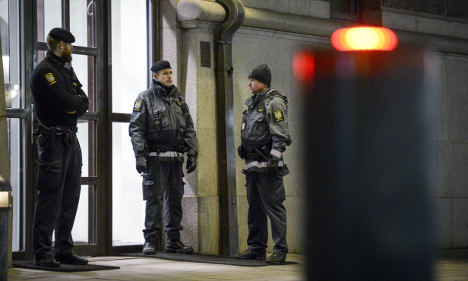 Police outside Sweden's parliament on Wednesday. Photo: Janerik Henriksson/TT
The threat level has been raised to “high” (or “four”), the second most serious out of five possible categories. Only a level-five threat (“very high”) is higher.
According to Säpo's definition, this means that “the probability that players have the intent and ability to carry out attacks is high”.
Säpo's Director General Anders Thornberg called a press conference on Wednesday evening, telling reporters that one person was suspected of planning terror activities in Sweden and had been arrested in absentia.
Interior Minister Anders Ygeman later said that authorities were checking out reports that the suspect could be in Sweden, although he said it remained unclear at this stage.
Thornberg declined to give any further information about the suspect, including his nationality or age.
“We're at an intensive operative stage and are working to analyse the information,” he told reporters.
“Violent Islamism is still the biggest threat against Sweden.” Säpo's Director General Anders Thornberg at the press conference. Photo: Fredrik Sandberg / TT
Thornberg added that the evidence gathered about a potential threat to Sweden was not directly linked to the terror attacks in Paris on Friday.
However he said: “There is a risk the past week's events could inspire individuals to carry out similar actions.”
Mats Sandberg, head of Sweden's National Centre for Terrorist Threat Assessment (NCT) told reporters: “Isis views Sweden as a legitimate target of violent Islamism. We're not a prioritized target, but a legitimate one.”
According to Sandberg, there are a “number of people” in Sweden that are considered to have the ability and the intention to carry out terror attacks in the Nordic nation and authorities are trying to establish how likely it is that their ideas could be put into action.
At a later press conference, Sweden's Interior Minister Anders Ygeman said that a series of measures already planned to increase security across the country would be put to parliament before Christmas, including making it more difficult for people to use fake passports when crossing the border into Sweden.
He said he hoped that there would be cross-party cooperation and that some of the policies could be fast-tracked.
Describing the shifting terror threat level, he added: “It is of course serious. It is the first time we're raising the level to four.” Sweden's Interior Minister Anders Ygeman, watched by a police officer at a press conference last week. Photo: Fredrik Sandberg/TT
LIVE: Read the latest on the Paris terror attacks on The Local France
Sweden's decision follows similar action in several other European countries including Italy, Belgium and Denmark, in the wake of the violence in France on Friday which left 129 people dead.
News of the changing threat level immediately sparked jitters in the Swedish capital, and became a talking point for commuters returning home during the evening rush hour, while others turned to social media to voice their concerns for friends and family in the city.
But Swedish authorities told people across the country that they did not need to change their behaviour in the wake of the new alert level. The terrorist threat in Sweden is very high now and my sister lives in Stockholm, I'm terrified

Ygeman suggested that there were indications the terror threat concerned various official buildings, rather than being targeted at the general population. It was not immediately clear if he was referring to a reported threat against the parliament and government offices in Stockholm earlier this week.
Thornberg said there was “absolutely no need” for Swedes to be afraid, but explained that they should have a slightly heightened state of vigilance.
“If people are worried I understand that, but we are taking all necessary measures, and it's important we don't give in to the fear the terrorists want us to feel,” added Ygeman during his press conference.