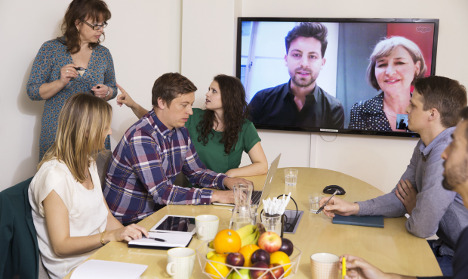 A Swedish business meeting. Photo: Suzanne Walström/Image Bank Sweden
Sweden was highly praised for its focus on investment and development, for offering working environments where English is spoken and for having a strong proportion of senior managers with international experience.
However its overall ranking was affected by poor performances on criteria including a lack of emphasis on science in schools, falling PISA scores (used to measure educational levels internationally) and for its record in ensuring apprenticeships are fully implemented.
A total of 61 nations were assessed for the World Talent Report published by the IMD World Competitiveness Centre.
Sweden's worst results in the study were linked to the high cost of living in the Scandinavian country.
It was ranked 47th for its high personal income tax rates and came 46th when assessed for the price of basic groceries and services.
Other Nordic nations performed much better in the rankings, with Denmark coming second, marking the 10th year in a row that the country has been placed in the top three. Norway came fourth, with Finland put sixth in the table.
Switzerland was ranked the best performing country, having maintained the top spot since 2007.
The report is based on competitiveness-related data going back 20 years, as well as an in-depth survey of more than 4,000 executives in all of the countries covered by the survey.
Overall, IMD said the research suggested that northern Europe boasts the greatest concentration of business talent hotspots in the world.
Despite sliding down the centre's rankings, Sweden has performed better in other recent business research focusing on its mushrooming startup industry.
Last month the capital was ranked among the top three best European cities for startups in a survey on which praised the Nordic country for its digital infrastructure.