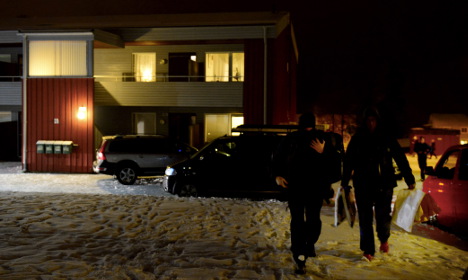 Boliden in northern Sweden where the man was arrested. Photo: Robert Granström/TT

UPDATE, November 23rd 2015: Moder Mothanna Magid was later freed without charge and cleared of all suspicions related to terrorism.

A document handed to Stockholm District Court by prosecutor Hans Ihrman on Friday states that a suspected terror attack was intended to be carried out in Stockholm, Swedish newspaper Dagens Nyheter reported just after midday.

The paperwork names the man arrested as Moder Mothama Magid, 22 years old. It lists his nationality as 'unknown', despite numerous reports in Swedish media claiming he is of Iraqi descent.

He was discovered on Thursday at housing for asylum seekers in Boliden in northern Sweden, run by the Swedish Migration Agency, close to the city of Skellefteå.

“The arrest took place in a calm manner and an interrogation with the person is planned,” Swedish Security Service Säpo said in a statement.

On Friday afternoon council and police representatives in Skellefteå held a press conference in the small city and reassured locals that they were not believed to have been at risk.

Police chief Lars Westermark said there were “no indications that Boliden or Skellefteå were the targets of any planned terror attacks” and recognised his staff for assisting Säpo officers with their operation.

However Skellefteå council chief Kristina Sundin Jonsson said that more resources had been allocated to school counselling services in case children or parents at a school near the asylum accommodation were still worried.

Säpo said its staff had carried out the first interrogation of the suspect at 11pm on Thursday and would be questioning him throughout Friday.

“We are now in a very intense stage of the investigation and we are still very interested in his activities and people he met with since arriving in Sweden,” spokesperson Mark Vadasz told the AFP news agency.

Meanwhile Defence Minister Peter Hultqvist confirmed in an interview with the Expressen tabloid that more terror suspects were believed to be at large, and were being hunted by security police in the Nordic country. However, when asked by other Swedish media later on Friday he refused to elaborate. A police officer at the asylum housing were the man was found. Photo: Robert Granström/TT

An unnamed witness speaking to regional newspaper Norran about Thursday's police raid said that a man had tried to hide on the balcony, where he was eventually overpowered and arrested by officers.

It was not known whether the man was Moder Mothama Magid or one of several others taken into custody for questioning on the night. Police did not confirm whether any of the other people being interrogated were suspected of criminal activity.

Several neighbours told the Aftonbladet newspaper that they believed the suspect had been living in the accommodation for just a few weeks.

“I did not have much contact with him, he looked glum and never said hello,” said one.

Another neighbour said he was dismayed to have been living so close to someone feared to have links with Isis (also known as Daesh).

“I feel terrible, because I escaped from Daesh in Syria. I really want to thank the police for arresting him,” he told the tabloid.

Further witnesses suggested to the newspaper that they had seen the 22-year-old suspect at a local swimming pool, at a sauna, and out partying in a bar in the nearest big city, Skellefteå.

Police outside the accommodation where the man was arrested. Photo: Robert Granström/TT

The man's arrest came a day after authorities revealed a massive hunt was under way for a suspected terrorist, as they raised Sweden's national terror threat level to a record high.

Earlier on Thursday a grainy picture of a man believed to be the suspect was shared widely in media across Sweden. Police told The Local that the same picture had been distributed to officers.

Following Moder Mothama Magid's capture, Säpo said on its website it continued to welcome any information or tips from members of the public.

The suspect is believed to have been living in Sweden since September. Aftonbladet reported that he handed in an application for asylum at the Migration Agency's centre in Märsta near Stockholm, although that has yet to be officially confirmed.

The tabloid added he was taken from Skellefteå to Stockholm to be questioned in the capital, where the investigation will be carried out, on Friday afternoon.

Säpo has said that the man's alleged activities are not thought to be linked to the Paris attacks last week, which left 130 people dead.

“I am impressed by the speed with which it has found and arrested the suspect,” it read.

Sweden's terror threat level remains at 'high' (or 'four') on Friday, the second-highest on a one to five scale, where five is 'very high'.

“I think people are going to see a lot of police officers around today. We will see what comes out of interrogations and information, if there's a reason to lower the [threat] level in the future. But it's too early to tell,” national police chief Dan Eliasson told TT.