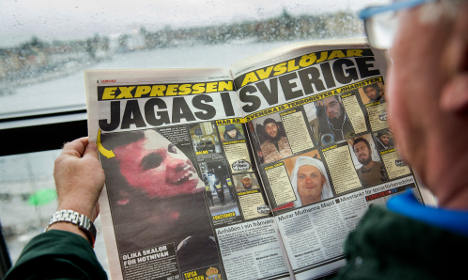 A newspaper showing the photo which is being shared across Sweden. Photo: Marcus Ericsson/TT

UPDATE, November 23rd 2015: Moder Mothanna Magid was later freed without charge and cleared of all suspicions related to terrorism.

A grainy of the man believed to be being hunted by Swedish authorities was being widely shared across Sweden on Thursday, following an announcement on Wednesday that the Swedish Security Service (Säpo) is searching for suspect who was “planning a terrorist act” on the Nordic nation.

Carolina Ekéus, press spokesperson for the national operative police (NOA), confirmed to The Local that the picture circulating in Swedish media had been distributed to police officers.

However she would not comment on reports that the man's name is Mutar Muthanna Majid. Säpo has also declined to comment on the suspect's identity.

Meanwhile Ekéus added that police had stepped up their presence at “strategic locations” across Sweden.

The picture of the suspect which first appeared in Swedish tabloid Expressen, shows a smiling young man with his face tilted upwards. According to the newspaper, the suspect is a member of Isis and is or has been in Sweden after spending time in Iraq, Syria and Germany.

Swedish public broadcaster SVT reported that it had information suggesting that the suspect is 25 years old and of Iraqi descent and had “some form of connection to Sweden”. The news network said it also understood that the man had fought for Isis in Syria.

Mats Löfving, head of the national police's operative department, told SVT that his officers could benefit from the man's photo being shared among the public.

“We may get more tips and observations,” he said.

“It was not completely unexpected that the picture would be shared. We are prepared for people starting to phone in tips now. There are pros and cons, but more eyes watching out are undeniably better,” Stockholm police control room officer Patrik Eriksson told the Dagens Nyheter newspaper.

The Aftonbladet tabloid cited unnamed police sources saying that while only one suspect had been arrested in absentia, he was believed to have “around 10” allies based in Sweden.

Meanwhile authorities in Denmark said that they had joined the hunt for the suspect.

At a press conference on Wednesday evening Säpo director Anders Thornberg said that the suspect is wanted over his activities in Sweden and that there is so far no link to the bloody attacks in Paris on Friday which left 129 people dead.

Sweden on Wednesday raised its national terror threat status to “high” (or four), the second-highest level on a five-point scale where five is the very highest, following an assessment by the National Centre for Terrorist Threat Assessment (NCT).

Säpo said in a statement the move was done in response to “concrete information”.

“The attacks in Paris on November 13th show that IS (Isis) may have an increased ability to carry out even relatively complex attacks in Europe. Individuals may be inspired by these attacks,” the service said.