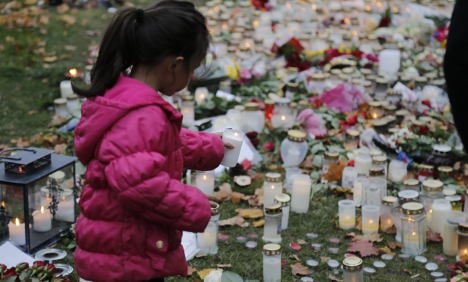 A child lighting a candle at the school last month. Photo: Adam Ihse/TT
Rain is lashing against the windows of Lexington Fritidsgård, an after school club where Trollhättan youth worker Mia Jansson is preparing to greet pupils whose lessons have wound up for the day.
Most of the children she supervises live in the tower blocks on the surrounding estate, which includes the school where a teenage boy and a teaching assistant were stabbed to death on October 22nd. Many are refugees who fled violence in their home countries to settle in the quiet industrial town, north of Gothenburg.
“The children still need to talk about it all the time, every day,” Jansson tells The Local.
“Lots of them have experience of war, and these feelings are somehow coming out again.”
One of the regulars at the club is the 15-year-old Syrian student who survived the attack, despite the assailant's sword damaging his pancreas, spleen, left lung and intestine. He had only been in living Sweden for a year.
“Wahid – he is here every day. He is really, really scared. He can't eat, he can't sleep,” Jansson reveals.
Lexington Fritidsgård is also where the late classroom assistant Lavin Eskandar, 20, spent much of his youth. Here, he played pool, watched movies and made music videos – before returning to help Jansson organize activities as a young adult.
His presence is still felt at the club, where an entire wall is covered with a huge montage of photos documenting his time there. Almost everyone you speak to describes him as a “hero” or a “role model”.
“Lavin I knew very well, since he was a little boy. [He was] the kindest, nicest person I ever met. The whole family, they have a heart of gold, every one of them,” says Jansson, trailing off as she chokes back tears.
READ ALSO: Teaching assistant's brother tells of 'hero' sibling The mural inside the youth club. Photo: The Local

Less than a kilometre away, parents are starting to gather outside the school where the attack took place exactly four weeks ago. Around 400 pupils aged between six and 15 study here. According to the national education watchdog, the Swedish Schools Inspectorate, only 16 percent of school leavers passed all their subjects in 2014, making it among the top-10 worst performing in the country.
There are no signs of bad behaviour on display as the pupils trickle calmly out of the main doors – still watched over by security guards – and head into the autumn rain.
One pupil, 12-year-old Ahmed, explains in perfect English how he and his friends ended up trapped in a classroom for several hours on the day of the stabbings, amid false rumours that there was also a fire in the building as well as multiple attackers in the corridors.
“Everyone was freaked out, they were jumping, screaming and everything and it was a tough time. Some – like half of the class – were crying.”
He says he has become more relaxed following a recent visit to the town by Sweden's King Carl XVI Gustaf and Queen Silvia.
“After that it feels a little bit safer here. But it's a little bit dangerous in the night. We can't go anywhere much without our dads and mums now.”

Ahmed, 12, who was caught up in the attack. Photo: The Local

Meanwhile Elledin, an eight-year-old who moved to Sweden nearly three years ago from Kosovo, rushes to give his mother a hug as soon as he leaves the building.

He did not see the violence and initially believed there was a commotion at the school because someone had been caught “stealing things”.
“I am a little bit nervous [now] (…) He came to attack our school,” he sighs.
“For me it was a catastrophe (…) I came directly and asked about my children,” his mum adds in broken Swedish.
“It's a good city (…) but now I also have stress. What can I tell you? I can't forget it, it's very hard.”
READ ALSO: Five important facts about Sweden's school attack Elledin, 8, says he has become more scared since the stabbings. Photo: The Local
The Kronan suburb does not feel unsafe, although it is clear that it is one of the town's poorer areas. There is little to do here besides visiting the local pizzeria and newsagent, both run by friendly immigrant families. As well as another youth club right next to the school, the only other major building in the area is a large Assyrian church, built for the thousands of Syrian Christians fleeing to the area since 2011. Around 19 percent of Trollhättan's population is foreign-born, three percent higher than the national average.
Unemployment here is also slightly higher than elsewhere (12.5 percent compared with eight percent nationally), but this remains strongly linked to the region's largest employer – Swedish car maker Saab – going bankrupt in 2011.

Housing opposite the Kronan school. Photo: The Local
“A situation like this has never happened in Sweden (…) it was a shock for all of us,” Social Democrat Mayor Paul Åkerlund tells The Local from his office in the town centre. Åkerlund has deep roots in the town, having previously been the local head of the IF Metall union at the Saab plant.
His centre-left party leads the local council, with just six out of a total of 61 seats taken by the anti-immigration Sweden Democrats, following the country's last elections in 2014.
While the school attacker is understood to have had Nazi roots and to have targeted Kronan because of its multi-ethnic population, Åkerlund rejects suggestions in the Swedish and global media of a growing far-right undercurrent in the town.
“It was random (…) it could have happened anywhere in Sweden. The best we can do is to try to go back to the normal situation as fast as we can.”
He also insists that immigrants are becoming “better and better integrated” and says he backs his government's promise to continue taking in asylum seekers, while working to secure a “fairer” distribution of refugees across the continent.
“I think we should do our best, the best we can to help people who are going from wars and so on – that's my opinion. If all countries in the European Union would take their responsibility I think we can do it.” Social worker Anitta Into (left) and Social Democrat Mayor Paul Åkerlund. Photo: The Local
His sentiment is backed up by the council's head of social welfare, Anitta Into, who co-ordinated the town's crisis team in the wake of the attack.
“I actually believe that this has pulled people together. The need from the public to explain that 'this is not Trollhättan, this is not my town, in my town I want to include people' (…) I get chills when I talk about it,” she says.
According to Into, council staff were overwhelmed with “love and offers of help” in the hours and days following the attack, from local pensioners baking cakes to a Buddhist monk offering to perform spiritual rituals and Danish Jews calling to share their experiences following the anti-semitic attacks in Copenhagen earlier this year. Back in Kronan, there's been a break in the rain and two Syrian boys have stopped for a chat opposite the pizzeria.
Aged 14 and 17, they are among the growing numbers of unaccompanied minors who have made their way to the Nordic nation. The eldest, called Morasem, says they arrived in Sweden just a week after the stabbings. They live in a nearby village with their 28-year-old brother, who sought asylum here two years ago.
“It's a very comfortable place to live and very quiet,” smiles Moresem.
He says he currently spends most of his time “walking, nothing new, like always” but dreams of returning to his studies at the Kronan school, despite its now infamous reputation.
“I hope, but there is no place. Maybe next year. I'm just waiting,” he says.