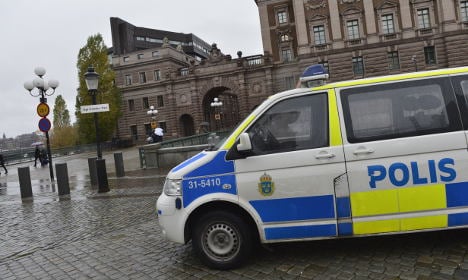 Police outside the Swedish Parliament in Stockholm. Photo: Jonas Ekströmer/TT
“I'm watching the press conference and I am wondering if we should stay in tonight,” a Finnish friend texted as Sweden's Security Service Säpo announced on Wednesday that the terror threat level in Sweden had been raised to 'high' amid a hunt for a man suspected of plotting terror crimes here.
“I've never seen such serious warnings from the authorities of any Nordic country,” the message continued.
On the streets of Stockholm on Thursday, there were similar jitters.
“I don't like the subway now. It doesn't feel nice,” said Helle Aarniporo, 58, who was visiting the capital from Umeå in northern Sweden.
“It's worse to be here than at home. There are many more people. I'm not from Stockholm, so I don't know what [places] to avoid or what to do,” she told The Local nervously as she prepared to board the underground at Slussen, a busy station close to the city centre. Helle Aarniporo is visiting Stockholm from northern Sweden. Photo: The Local
For plenty of Swedish residents the idea of a terror attack on home soil remains unimaginable. The country is frequently ranked among the safest and most peaceful in the world.
There has never before been a nationwide threat level this high, although it was briefly raised in Gothenburg in 2007 amid fears of terrorist activities in the city.
Unlike in Paris, Madrid, London or Copenhagen, there is no history of Swedes being killed at the hands of Islamist extremists in their home country.
Stockholm did experience an attempted suicide attack in 2010, but while the bomber died, only two people were hospitalized with minor injuries.
“It really is a game changer,” said terrorism expert Magnus Ranstorp from the Swedish Defence University when contacted by The Local.
“Other European countries are raising the threat levels, so this is part of the European reaction. But also we now have this concrete threat,” he added.
“I think that most people have been pretty ignorant and in a state of denial about the threat of extremism – general Swedes and politicians (…) Now people are waking up to the idea that this is an immediate threat, this is very real.”

Sweden's Security Service Säpo's headquarters in Solna, north of Stockholm. Photo: Jan Eriksson/TT
Sweden's new high alert status comes amid growing evidence that rising numbers of residents have links to extremist groups.
Just a day after the deadly attacks in Paris left 129 people dead, Gothenburg was cited as the largest European recruiting ground for Isis per capita by Swedish integration police chief, Ulf Boström.
Sweden' Security Service, Säpo, revealed last month that more than 300 Swedish nationals have left the country to travel to fight with Islamic extremist groups in Syria and Iraq.
Despite the shifting dynamic in the Scandinavian country, authorities have been quick to reassure people that — so far — no threats have been made against the general population.
At his press conference on Wednesday night, Interior Minister Ygeman said that only official buildings had been targeted and urged people not to “give in to the fear that the terrorists want us to feel”.
Meanwhile Säpo's Director General Anders Thornberg said there was “absolutely no need” for Swedes to be afraid, but explained that they should have a slightly heightened state of vigilance.
Their messages do appear to have got through to some Stockholmers, with many brushing off the fears expressed by other residents when approached by The Local on Thursday.
“I have seen some people writing questions online and stuff and they seem quite scared, but in my circle at least people aren't worried,” said Alexander Östman, 25, who lives in the Södermalm neighbourhood, just south of the city centre.
“They [Swedish authorities] were quite honest to say that it was a more general raise across the whole country. If it was just Södermalm for example, I would be perhaps a bit more threatened, but right now I just feel that they explained it pretty good, why they raised the threat level.” Alexander Östman, 25, says he is not worried about terrorism in Sweden. Photo: The Local
Linus Skoglund Orwald, 17, told The Local that while he had been “terrified” to hear about the recent attacks in the French capital, where his cousins live, he was not concerned about anything similar happening in his home city.
“I trust our security and I hope the government can handle this (…) it can't happen over here in Sweden.”
But the fact that Säpo has raised the threat level is firm evidence that Nordic authorities believe a terror attack is possible.
The official definition of a 'high' alert is that “the probability that players have the intent and ability to carry out attacks is high”.
While Swedes appear to be divided on how to respond to the new warning, what is clear is that discussions about terrorism are no longer focused on what's happening abroad.
In offices, homes and universities around the country, people are asking “what if a terror attack happens in Sweden?”.
That is a huge deal in a country that has just celebrated 200 years of peace.