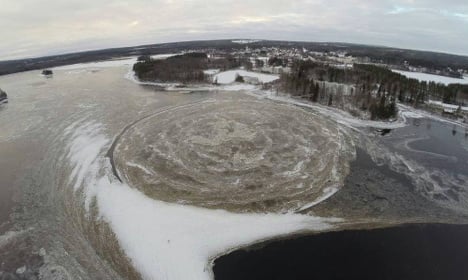 The ice circle in the River Kalix in northern Sweden. Photo: Torgny Johansson

Torgny Johansson spoke to The Local a day after he snapped the picture of the enormous ice circle floating in the Kalix River at Forsbyn, 75 kilometres north of Luleå, using his drone.

“I have seen one maybe two or three times before near the same place as this one. But nothing as large as this,” he said.

Ice circles are formed in slow-moving areas of rivers where a part of the current moves in the opposite direction to the main stream, a so-called 'backstream'.

When the water freezes the circling currents form an ice disc.

A relatively rare natural phenomenon in most of the world, they are seen fairly frequently in northern Sweden, but not often as huge as the one captured in the Kalix River.

“I don't think they are that uncommon in streams in the north of Sweden, but they may be hard to see when you are on the ground,” Johansson told The Local after the story was first written about by regional newspaper Norrbottens-Kuriren.

POLICE
Four people die after falling through the ice in Sweden
Url copied to clipboard!