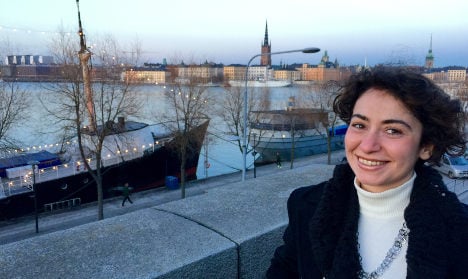 Chiara Carucci in Stockholm. Photo: Private
Struggling with the short, dark winter days in Sweden? Chiara Carucci's job revolves around projects designed to give people optimum exposure to artificial lighting – which can play a huge role in boosting our moods.
She works alongside architects, engineers, physicists and city planners to design outdoor lights and glowing facades around buildings or on squares, bridges or stairways, designed to create the perfect atmosphere for each location.
“I can really feel that people get sick and depressed because of the lack of daylight here in Sweden. So I know I can make a difference, my work is important here,” Carucci explains.
“Lighting design is my profession, my passion and my lifestyle (…) it's about arranging the layers of light people are exposed to and how that affects their wellbeing,” the Italian adds.

ÅF, where Chiara Carucci works, designed some of the lighting in the new Mall of Scandinavia in Solna. Photo: Marcus Ericsson/TT
The 36-year-old – who hails from sunny southern Italy – first heard about Swedish consulting firm ÅF during a lighting conference in Copenhagen.
An expert in her field, she then ended up meeting the company's managers while she was in Stockholm giving a talk about her role in the International Year of Light. The initiative – coordinated by the United Nations – is designed to raise awareness about the functions that lighting technologies can play in improving lifes across the planet.
“ÅF didn't have any open positions but a manager approached me after my lecture and then they asked me to join them (…) Four weeks later I was working in Stockholm!” the designer says, laughing. Carucci's company worked on this staircase for Hudiksvall municipality in northern Sweden. Photo: Mikael Silkeberg
While ÅF is a large Nordic company with some 8,000 staff, Carucci is among just 35 lighting designers in the Swedish capital. One of the team's most recent projects involved the lighting for the brand new giant Mall of Scandinavia in Solna, north of the city, which opened earlier this month.
In December, the colleagues will be lighting up Swedish heritage sites in the small historic wooden town of Eksjö in southern Sweden, as part of a locally organized light festival there. The idea is to bring the buildings to life during the darkest months of the year by giving them a given a fresh glow.
“It's about deciding how all the lights are put together and the general effect they give (…) having the right lighting just exactly when and where you need it,” argues Carucci. A lighting project Chiara Carucci is working on in Eksjö. Photo: ÅF
The new Swedish resident describes her close-knit team “very talented and brilliant” and says her co-workers have also helped her overcome some of the “culture shock” she's experienced since relocating to northern Europe.
“I am an Italian and so of course we talk a lot and we also have a very important body language with our hands and facial expressions. But I am a bit blind to people in Sweden! I cannot read their facial expressions as they are not as clear as mine,” she laughs.
“So, especially with my clients, it is not always so easy to see if they are happy or not. But I am learning. My colleagues are giving me feedback and also trying to make me understand how I can adapt my own energy and convey it in the best possible way to our customers.”

Fristadstorget, a square in Eskilstuna, west of Stockholm, where ÅF also designed the lighting. Photo: Sten Jansin
Despite knowing no one in Stockholm when she accepted her post in the city, Carucci describes her social life as “absolutely great” thanks to throwing herself into a range of activities organised by members of the online community network Meetup.
“It gave me the chance to meet many, many expats, and most of my friends here from abroad…Greece, Canada, Morocco. I also have some Swedish friends too. I actually met them at an English debate club that is part of Meetup!” she giggles.
For Carucci, living in Stockholm also fulfils a lifelong dream to live closer to nature.
“I moved in the spring so I got to see the city come alive. I just love the water here and the fact I can be near so many parts even though I am in the city. Since I also enjoy walking and hiking and camping – for me this is the perfect location.”
But Carucci has some advice for any fellow Italians making the move north: don't expect the same kind of flirting as you find back home.
“You could really be the most beautiful woman in the world and not be noticed!…Not that I am saying I am the most beautiful!” she laughs.
“Dating is a bit difficult but of course there are nice guys in Sweden. They are very tall. They are like Vikings. It's amazing!”