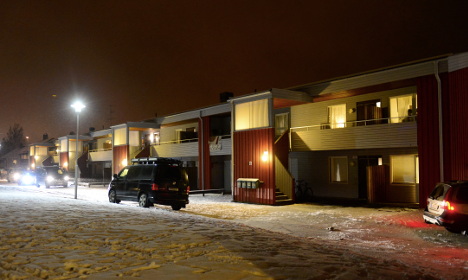 The police raid in Boliden on Thursday. Photo: Robert Granström/TT

Moder Mothanna Magid was freed without charge and cleared of all suspicions related to terrorism on Sunday, three days after the Säpo security police arrested him in a raid on the asylum accommodation where he had been staying in northern Sweden.

“He is no longer suspected of any crime,” the national prosecutor's office said in a press release.

A couple of hours later Magid phoned his friends in the small town of Boliden.

“I feel fine,” he was quoted as saying by the Aftonbladet tabloid.

Swedish commentators have been lambasting Säpo for what looks likely to go down as one of the most embarrassing false alarms in history. The authority itself said it would now be offering help so that the falsely accused Magid could safely return to society.

“It has to do with his opportunities to continue to live his life in a safe and secure way in Sweden,” press spokesperson Fredrik Milder told Swedish public radio.

“His life has been affected by this incident. We have to take responsibility just as other authorities do when people are torn from their daily lives and are put into a situation like this,” added Milder.

Meanwhile, Aftonbladet reported the relieved 22-year-old told his friends he was determined to return to Boliden, where he had been staying for several weeks. He also said he had been treated well by Swedish police and held no grudge over his time in custody.

“I am happy to be able to contact my family and my friends,” he said. “I feel fine, everything is perfect.”

“I can only underline that the initial information and the evidence which pointed against him, was sufficiently severe that, in any criminal investigation he would be in focus,” he said. “It was very concrete information and he was pointed out very clearly. I assume we would have done this with or without what happened in Paris.”

He said that since Magid's arrest, analysis of his computer and mobile telephone, together with his own explanation of the incriminating evidence, had convinced police of his innocence.

“You are forced to act based on an incomplete picture of the situation, and given the uncertain situation that exists right now, it is likely that Europe and Sweden too must adapt to this type of situation in future,” she said.  “The police and Säpo will never hesitate to act quickly and resolutely in such a situation.”