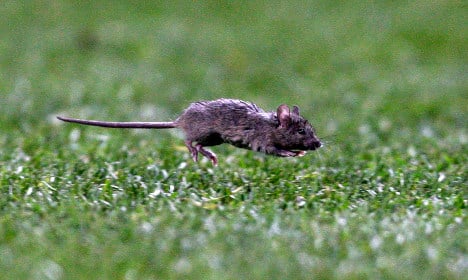 A mouse not related to the blackout. Photo: AP Photo/Jon Super

Around 5,600 customers were plunged into darkness during a power blackout that lasted for more than four hours on Thursday night, thanks to a hitherto unknown culprit.

The rodent, whose lifeless body was found by repair workers earlier in the day, had likely sneaked into one of the switch gear boxes and electrocuted himself gnawing on the cables.

A rather gruesome picture of the vandal was published by Falkenberg Energi.

While innocent until proven guilty, there were rumours that the mouse was possibly attempting a raid on one of the hardest-hit victims of the power blackout: a major cheese producer in the town.

Arla's dairy factory in Falkenberg was left without electricity for around nine hours and was forced to discard huge amounts of cottage cheese as a result of the blackout.

“I don't know about costs, but it's millions of kronor. What is supposed to go out on the market tomorrow does not exist, that effect is really bad,” factory head Owe Jarlö told the regional daily at the time.

The incident continued to spark intermittent blackouts throughout the weekend and on Monday, while workers battled to restore power to everyone as temperatures dropped in southern Sweden.

Earlier this year, a beaver knocked out power for around 15,000 Swedish homes after his tree-felling project took down an electricity wire in the Södertälje area.

And in 2012 a New York-bound SAS flight carrying 200 passengers was grounded in Stockholm after a mouse sneaked onboard.