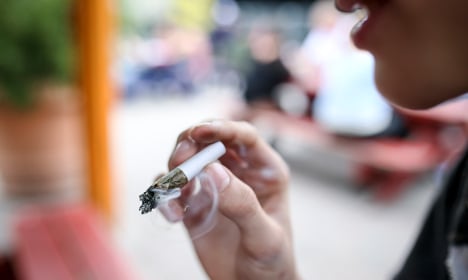 Nine out of ten Swedes think a ban on illicit drugs should remain in place. Photo: Helena Landstedt/TT

A whopping 91 percent of respondents told major pollsters Sifo that they think consumption of narcotics should remain illegal. Seven percent opted against a ban and three percent said they did not know.

Stockholmers were significantly more in favour of legalizing illicit drugs, the poll suggested. No more than 82 percent of those living in the Swedish capital region said they supported an outright ban.

However residents in northern, as well as in southern, Sweden were most supportive of drugs remaining illegal – around 94-95 percent.

Around 1,000 respondents were questioned for the survey, which was carried out on behalf of the Swedish Carnegie Institute, which promotes research on drug abuse and criminality.

“The result is possibly somewhat surprising given the intense debate on the approach to drugs that has taken place in recent years and where several commentators have pushed for scrapping the consumption ban,” read a statement on its website.

Although Sweden's ruling centre-left government does not support lifting the narcotics ban, several high-profile campaigners have called for a legalization of some drugs, such as cannabis or marijuana, saying such a move would move it off the market of organized crime.

Anyone even suspected of being 'high' can be detained and given a compulsory urine test. If positive, they are slapped with a criminal charge and must stand trial.

Sweden also puts a strong emphasis on prevention strategies, with extensive drug awareness programmes in schools and even preschools. Some substances are used in certain cases as approved medical treatment.

According to figures released by European Monitoring Centre for Drugs and Drug Addiction (EMCDDA) last year, only nine percent of the Swedish school population has tried cannabis, compared to 39 percent in France, 42 percent in the Czech Republic and around 25 percent in Britain, Belgium and the Netherlands.