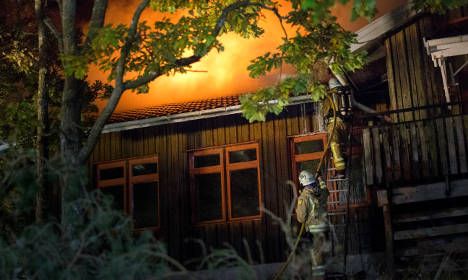 A fire in Onsala in October. Photo: Björn Larsson Rosvall/TT

“I came from my room to see what was happening. I saw the fire and ran outside,” says Dawit, a 13-year-old Ethiopian boy living in a Swedish centre for asylum seekers.

His voice is steady and lacking emotion, but the arson attack on his temporary home for unaccompanied children has cast a shadow over his hopes of living in safety one day.

At least 25 centres for asylum seekers in the Scandinavian country have been reduced to ashes or damaged by fires this year, often set in the dark of night while the migrants sleep, unaware of the danger they are in.

Some centres have had stones thrown at them, while others have been vandalized.

In the town of Malung, a cross two metres high was raised and set ablaze outside a centre, in the style of the Ku Klux Klan, the US white supremacist movement.

The attacks have largely taken place in rural areas in the southern third of the country, south of the capital Stockholm, where the far-right Sweden Democrats are well established.

In the southern university town of Lund, Dawit – not his real name – says the attack on his shelter left him and its 13 other young residents shaken.

“People were afraid,” he admits, looking far older than his 13 years as he makes toast for breakfast in the centre's dining room before starting the day in the autumn sunshine with a cigarette and an energy drink.

On October 26th, Dawit was in his room late at night when the fire broke out, smoke billowing into the cozy communal area where the boys normally watch TV after doing their homework.

The flames were quickly brought under control but the brutality of the act stunned the youths. It was unthinkable to them that someone would attack children seeking a safe haven, especially in a country known for its tolerance and openness.

Arson attacks have surged as the number of migrants grows: Sweden expects up to 190,000 asylum seekers this year and 170,000 next year, making it the European Union Country with the most arrivals per capita. A fire in Floda in central Sweden in November. Photo: Björn Larsson Rosvall/TT

Two days after the Lund attack, a man was arrested as he tried to break into an asylum seeker centre in the south-western town of Vänersborg to “stab foreigners”, by his own account.

A week earlier, a young far-right supporter armed with a sword had killed a teacher and a student, both of foreign origin, at a school in the neighbouring town of Trollhättan.

The arson attacks on centres for asylum seekers have not caused any deaths or serious injuries, but the fear is palpable among the migrants who have fled war and political, religious or ethnic persecution.

While leader Jimmie Åkesson has publicly condemned all calls for violence, the Sweden Democrats party has likened the massive influx of migrants to an “invasion”, while other radical groupings that abound on the web are accused of stirring up racial hatred.

Mona Sahlin, the national coordinator for protecting democracy against violent extremism, is critical of the “inflammatory” rhetoric being spread in the public debate and on social networks.

“I'm certain that it is part of the far-right extremist movement to use the refugee situation to strengthen their arguments… It was the same 20 years ago,” Sahlin told the AFP news agency in an interview.

At the Lund centre, life has returned to normal. Guards now patrol the outside and inside of the building every two hours.

On the fire-damaged backdoor, Lund residents have left dozens of heart-shaped notes offering their support.

“Welcome! I hope you will feel safe now,” reads one.