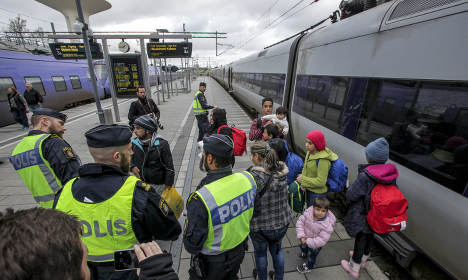 Many of Sweden’s critics are crowing today after the centre-left coalition government on Tuesday afternoon announced a shock tightening of asylum rules in a bid to stem the influx of refugees.

Anyone who watched the Social Democrat prime minister, Stefan Löfven, and his Green party deputy, Åsa Romson, deliver the new, much tighter, measures last night, would scoff at such nonsense.

Löfven was speaking through almost-gritted teeth, such was his anger at his fellow EU leaders (German chancellor Angela Merkel aside, perhaps) and their resistance to taking any kind of responsibility for the refugee crisis.

Her Green party has long been the most refugee-friendly party in the Swedish parliament – the Riksdag – and her part in the clampdown on the numbers of refugees being allowed entry clearly stung her sharply.

These were not the attitudes of politicians who have undergone an ideological transformation.

Rather, they clearly restated their commitment to humanitarian values and emphasised how upset they were that they could no longer fulfil their earlier promises to those fleeing violence in the Middle East and Africa. Sweden’s U-turn was brought about not by a dramatic shift in worldview but because of practical matters.

Quite simply, Sweden could no longer cope with being one of the only two countries in Europe prepared to take responsibility in the midst of a global humanitarian crisis.

Newspapers this morning reported that a UN ambassador (who asked to remain anonymous) had remarked, “The last bastion of humanitarianism has fallen”.

This is, of course, abject piffle. Sweden, along with Norway, is still at the forefront of the type of international development aid aimed not at governments but at civil society.

This is the sort of aid that promotes liberalism and changes and saves lives.

There are proposals for some of this aid to be cut to help fund the surge of refugees but Sweden would still be at the vanguard of those countries devoting funds to those working on democracy-building and human rights.

However, it is quite clear that the government’s apparatus for dealing with the current influx of refugees (190,000 are expected this year) is close to collapse.

There is no emergency accommodation left and the welfare system is groaning. It’s obvious Sweden can do no more.

But this does not signify Sweden's fall from grace as a humanitarian superpower.

Swedish heads can still be held high and proud in the international community.

No, this U-turn is purely attributable to a shameful lack of compassion and courage from the rest of Europe.

Sweden’s critics may be gloating now but history will not look kindly upon their cowardice.