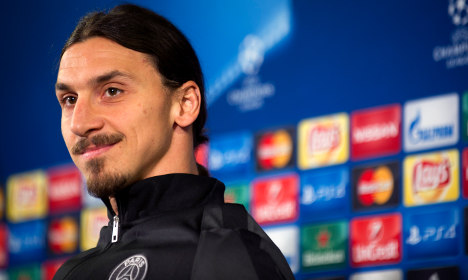 Zlatan Ibrahimovic at a press conference ahead of the match. Photo: Björn Lindgren/TT

The Paris Saint-Germain footballer began his career with the southern Swedish club in 1999 and scored 16 goals in two seasons before moving to Ajax, where he won two Dutch titles.

He has since claimed league crowns in Italy, Spain and France, playing for Juventus, Inter Milan, AC Milan, Barcelona and now PSG.

“The perfect scenario would be to win the match, I score three goals and everyone sings my name,” the Sweden captain, who recently inspired his country to Euro 2016 qualification following a playoff win over neighbours Denmark, said optimistically. Reporters gathered at a press conference ahead of the hyped match. Photo: Björn Lindgren/TT

The ever-confident 34-year-old also declared his future is in his own hands once his contract with PSG expires at the end of the 2015-16 season.

“A lot of people have said it will be my last season with Paris and with the national team and there have been a lot of rumours. But the only person who will decide my future is me,” said the prolific marksman.

“I am enjoying the present moment, I will decide what I want and I don't know what I want for the future,” he added.

“As long as I'm playing at this level, I will continue. I will not continue to play just because of my name and I will only stay a player as long as I maintain my level,” he concluded. Turning Torso lit up by a blue 'Z' and the MFF logo. Photo: TT/MFF

Meanwhile, Malmö was preparing to welcome Ibrahimovic back to his home town, with a blue 'Z' lighting up the iconic Turning Torso tower on Tuesday evening. Later in the night, however, it was replaced with the symbol for MFF, to show where the city's true allegiance lies.

Preparations for Wednesday's game have been under way in Malmö from the moment it was announced that PSG would be coming to town.

“All of Malmö will be able to watch the game. I've booked the main square where the game… will be broadcast live,” Ibrahimovic wrote on Facebook in September. A victory for Ligue 1 champions PSG will guarantee qualification for the knockout phase next year.

Real Madrid have already qualified from the group and travel to Ukrainian side Shakhtar Donetsk the same night.