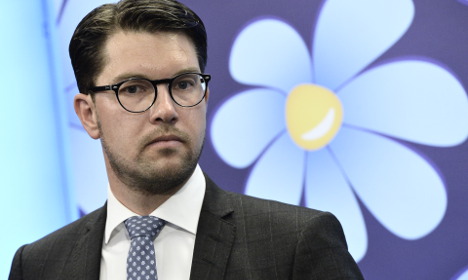 The new campaign was reported to have appeared in newspapers across Serbia, Turkey and Afghanistan.

Under a “closed borders, temporary residence, restricted welfare” headline, continued a gloomy message from the anti-immigration party, meant to discourage refugees from heading to the Nordics.

But the party caused a stir when it signed the adverts, “The Sweden Democrats and the Moderates”, using the name of Sweden's biggest party in opposition – which on Thursday said it did not support the campaign.

“You might have heard positive things about Sweden and the Swedish people. We are such a generous people and we often put other people's needs and welfare in front of our own,” read the advert.

“Our desire to help others has shown to be greater than what we have been able to afford,” it continued, before claiming that the Sweden Democrats and the Moderate Party were in agreement.

But a spokesman for the Moderate Party insisted the sentiment was not shared.

Communications director Per Nilsson replied, sarcastically: “That the Sweden Democrats choose to devote all their time to various PR games, adverts and advertising campaigns, that's on them. It's probably an expression of how seriously they actually take these issues.”

A previous campaign by the Sweden Democrats – which included flyers handed out in Greece – was ridiculed after it included exaggerated claims about Sweden such as that hijabs would be banned and all refugees were living in tents.

“The purpose is to decrease the inflow of immigrants to Sweden, by providing them with an updated, more realistic picture of what life could be like in Sweden in the future. Even politicians from our government are now talking about the situation as non-sustainable. Sweden Democrats are trying to do something about it,” spokesperson Linda Myrin told The Local at the time.

On Tuesday the centre-left Social Democrat-Green government announced it was tightening asylum rules, including the introduction of temporary residence permits for all new refugees and stricter border checks, to cope with an unprecedented influx of refugees to the Nordic country.

While the Moderates' approach is not as tough as the Sweden Democrats', who want to see total border closures to refugees, party leader Anna Kinberg Batra commented that she wanted to see harsher measures than the ones introduced by the government.

“We need to deflate the pressure. The purpose is to make other countries take greater responsibility, otherwise we won't reach good enough results,” she said.

The Local has contacted the Moderates and the Sweden Democrats for comments.