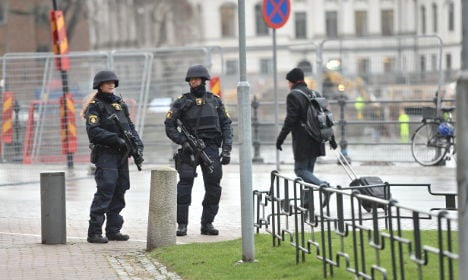 Officers filed the reports after Sweden's security police Säpo put the country on 'high' (our 'four') alert for a terror attack for the first time in history (the second-highest on a five-point scale where 'five' is 'very high') after launching a nationwide manhunt for an alleged terrorist.

The 22-year-old terror suspect was cleared of all suspicion just days later and the investigation was dropped. However, Sweden's terror threat alert has remained at level 'high' with police presence stepped up across the country since.

But in the wake of the Paris attacks, officers themselves fear they have neither the protective gear nor the weapons needed to fight any potential terrorists if they launched an assault on Swedish soil.

“We are sent out without adequate weapons, only a nine millimetre service pistol. We are also told that there may not be enough protective vests and ballistic helmets,” wrote one police officer, named only as 'Christian', in an internal incident report written between November 18th and 20th, and seen by investigative news agency Siren.

“It feels like being sent out on a lion hunt with a pea-shooter and a jumpsuit made out of zebra meat,” he added.

One of his colleagues, 'Niklas', wrote that he was forced to patrol a location considered at risk of terror attacks without a protective helmet, as those available were the wrong size for his head.

“Without the right equipment and with inadequate training in tactics and shooting we still had to work as live targets without any kind of chance to defend ourselves or our [locations] against a potential attack,” he wrote.

READ ALSO: What should you do during a terror attack?

Sweden has only experienced one terror attack on home soil – a suicide bomber who launched a failed attempt in a busy shopping street in the run-up to Christmas 2010, managing to kill only himself. But officers complain that they have not been given more training after the incident.

“To be sent out on this kind of mission without training and proper equipment does not feel safe at all and creates an enormous sense of insecurity being faced with a scenario where you encounter perpetrators, which would in principle spell your death sentence in those cases you did not have time to escape,” wrote a police officer named as 'Johan' in another internal incident report.

The national police did not comment the reports when approached by Swedish public broadcaster SVT.

Sweden's Prime Minister Stefan Löfven said last week his country had been “naive” about the possibility of a terror attack.

“Perhaps it's been hard for us to accept that in the middle of our open, democratic society there are people sympathizing with the Isil killers,” he told journalists at a press conference in Stockholm on Thursday, referring to militant extremist organization Isis (also known as Isil).

Säpo revealed last month that around 300 Swedish nationals are believed to have left the country to travel to fight with Islamic extremist groups in Syria and Iraq. The security service has said it fears some of them may return with the purpose of preparing an attack in or on Sweden.