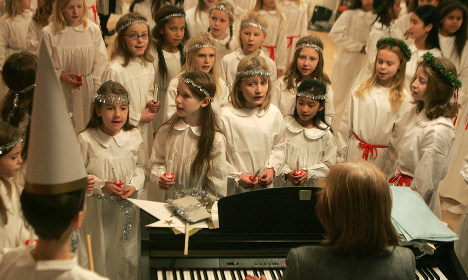 On Wednesday a nursery school in Charlottenberg in Eda municipality, in west central Sweden, sent a note to parents informing them of its decision to not invite parents to the school’s Lucia event.

However, the note was interpreted by many as the school dropping the Lucia celebrations – a pre-Christmas festival in which children dress up in white and sing Christmas songs – altogether.

The note was shared on social media and went viral, with many parents incorrectly criticizing the school for abolishing the popular December tradition altogether.

The section of the note that seemed to infuriate parents translates as: “We have decided not to celebrate Lucia with a traditional Luciafest with parents invited this year. According to the curriculum we will mark our children's different traditions, we will draw attention to Christmas in different ways with the children in their daily activities.”

The note also goes on to say, “no one should feel discriminated against because of their cultural or aesthetic (sic) background.”

One Facebook user said: “I'm going crazy! Why should we respect their festivals and traditions when we cannot even keep ours that has existed for a hundred years?”

“There’s been a giant storm around this note, but it has been misinterpreted – the school is not saying it will not celebrate Lucia, but that it will not invite the parents,” she told Metro newspaper.

“We have seen from a child's perspective that they get tired and do not understand the point of so much practising.”

“The wording [of the note] was perhaps a bit unfortunate, but I fully support the staff in this. It says that no one should feel discriminated against because of their cultural background – but it's not about taking away the Swedish tradition but about paying attention to other traditions and to not have parents present.”

Swedes celebrate Lucia on December 13th and the occasion involves a procession led by a girl who wears candles on her head (representing Saint Lucia or Saint Lucy as she is usually known in English) along with a long white gown, singing songs to honour the saint and mark the long nights of the Scandinavian winter.

However, interest in Lucia, and, in particular, finding a local girl to become a Lucia is becoming increasingly difficult.

Swedish Radio's Culture News reported in 2012 that the number of municipalities without an official Lucia was as high as 30 percent, with the number this year likely to exceed that.

Mats Nilsson, an ethnologist, told TT news agency that the declining interest in celebrating Lucia was to be expected.

“Customs and traditions are changing all the time. The Lucia procession is not even a century old; it started in the 1930s.”

“As I understand many young people are uninterested in it. And you cannot force that interest.”