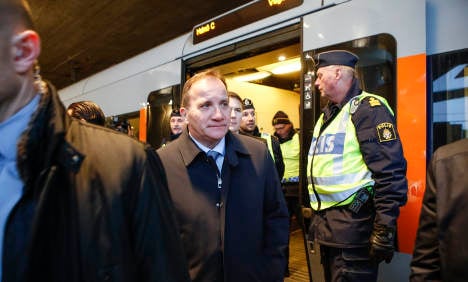 The deal came after the German Chancellor Angela Merkel held a surprise summit in Brussels involving the leaders of nine countries including Sweden, France and the UK.

The European nations agreed to pay Turkey three billion euros overall – with 500 million euros coming from the EU budget and the rest made up by member states – to help cover the costs of the more than two million refugees already in Turkey, with more arriving every day.

“It is obvious that the EU and Turkey need to work [together] more and better, both to improve the situation of refugees in Turkey, but also to secure the borders and combat human trafficking,” Sweden’s Prime Minister Stefan Löfven said after the meeting.

The Swedish leader said his country was expected to put in the equivalent of around 77 million kronor (8.3 million euros, 8.8 million dollars).

“The hope of course is that fewer [people] have to leave Turkey in order to get to Europe on these perilous journeys,” Löfven added, in reference to the dangerous boat travel across the Mediterranean that has already claimed the lives of thousands of refugees.

“Turkey justifiably expects the EU to take some of the burden off its shoulders,” Merkel said.

As well as offering cash aid, leaders said that Turkey's discussions with the EU on visa-free entry to Europe for its citizens would continue, with the move possibly coming into effect by October 2016. Talks to join the bloc will also be sped up, with a new chapter of negotiations opened as soon as next month.

In return, Turkey has promised to do a better job of guarding its coasts and hunting down people traffickers.

The deal is a big step for Europe, which has proved reluctant to move forward with accession negotiations in recent years, citing Erdogan's increasingly authoritarian governance of his country.

Turkey has come in for sharp criticism of its justice system and a lack of press freedom in particular.

“Human rights, press freedom – all these things are important and will keep coming back up,” EU Commission President Jean-Claude Juncker said.

”It's not three billion euros for Turkey's public treasury, but three billion that will go specifically to improve the situation of refugees,” stressed Löfven.