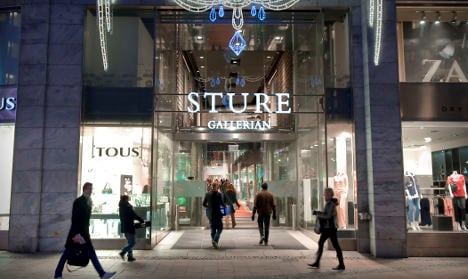 Sturegallerian shopping centre in Östermalm, which was affected by the power problems. Photo: Claudio Bresciani/TT

As if Stockholm wasn't already dark enough at this time of year, thousands of customers using the energy provider Ellevio were unable to switch on their lights this lunchtime.

A power outage struck at around 11.40am, affecting the central districts of Östermalm, Norrmalm and Kungsholmen where numerous major international companies are based alongside some of the capital's biggest shopping areas and tourist hotspots.

The electricity company said that a technical glitch at a distribution centre in Brunkeberg, south of Stockholm, had caused the problem, which left some residents and businesses in the dark for two hours.

A Swedish office almost in the dark after the power cut, tweeted by a Swedish news organisation

Reports in the Swedish media initially suggested that up to 8,300 customers had been affected but Ellevio posted on its website that 7,600 had lost power.

The company said in a statement that the majority of customers had their electricity back by 13.41pm.

“It is obviously not good to have power outages, whenever and wherever they occur,” said Jonathan Björk, a press spokesperson for the company.

“Now it happened in the middle of Stockholm during lunchtime and it affected many people, shops and restaurants. We apologize for the inconvenience and will now do a thorough analysis to make sure the same thing does not happen again,” he added.