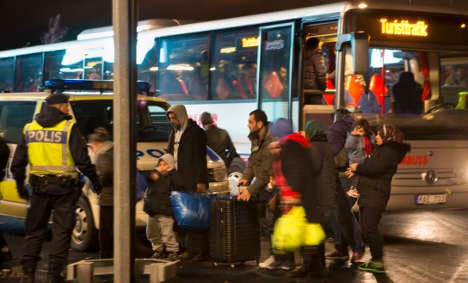 “Sweden is among the group of member states that has welcomed the highest number of refugees this year,” Avramopoulos said at a press conference in Stockholm on Monday, adding that Sweden had made “tremendous efforts”.

In September, the EU unveiled a plan for redistributing nearly 160,000 migrants and refugees from frontline states Italy and Greece although so far only a small number have been relocated. These include 19 people from Eritrea who were sent to northern Sweden.

But earlier this month Sweden asked Brussels to relocate to other EU countries some of the asylum seekers arriving by the thousands in the country, after revealing that it could no longer guarantee accommodation to all of those fleeing violence in their home nations.

“Sweden has asked to become a beneficiary of the relocation mechanism,” Avramopoulos said. “We completely understand this.”

The Commissioner added that in the future Sweden would be exempt from taking in migrants under the relocation programme.

Sweden is home to 9.8 million people and has received 80,000 asylum applications in the past two months alone, which would be the equivalent of 25 million asylum seekers for the entire EU, Prime Minister Stefan Löfven said last week, after announcing that Sweden would drastically tighten its asylum rules.

The country reinstated border controls last month and since then the number of new migrant arrivals has dropped by a third, according to Sweden's migration agency.