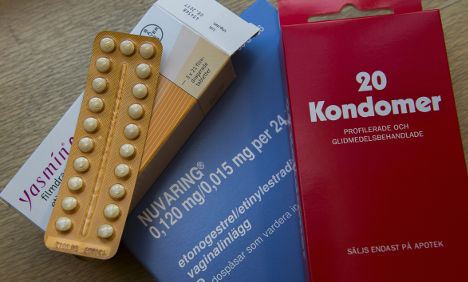 The public clinic, which caters to young people up to the age of 23, said the initiative was aimed at turning around declining condom use in Sweden and making sure young men buy the right size condom to prevent sexually-transmitted diseases.

The specially-designed measuring tape, which checks circumference and not length, is being handed out free of charge at the clinic (Stockholms skolors ungdomsmottagning) in the suburb of Odenplan, as World Aids Day gets underway.

Walk-in patients can then head home with condoms spanning six different sizes, from 49mm to 64mm.

Eddie Sandström, a male nurse at the clinic, told The Local at 10am that no-one had yet turned up to claim their free tape, but said he was convinced the initiative was a way to make sex talk “more open and a bit more fun”.

“Teenagers are really tired in the morning so I presume they will come after lunch,” he laughed.

“A common reason for a condom slipping off or breaking during sex is that you've bought the wrong size…You have to measure the circumference of the penis when erect, not the length,” the nurse added in a podcast on the clinic's website.

“On our measuring tape you get the measurement in millimetres and a few recommendations for condom types that are suitable,” he said.

Sandström told The Local that national awareness campaigns were not getting Swedes to use more condoms, with sexually transmitted diseases including gonorrhea rising in the Nordic nation.

“It's difficult to say why. That's what we are looking at this nationally,” he said.

“But alcohol is one thing — when you are drunk you are not thinking — and young people don't plan their sexual meetings either.”

The tape initiative is part of a wider project to promote sexual awareness among young people, run by Stockholm City Council.