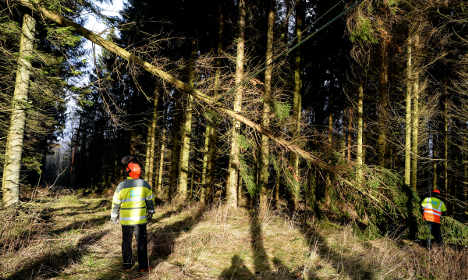 Gorm the Storm recorded wind speeds of up to 32 metres per second when it ripped through southern and western Sweden on Sunday night, leaving a trail of destruction.

Tens of thousands of customers were left without power, while residents reported everything from broken window panes to entire roofs blowing off and walls collapsing.

Major insurance company Länsförsäkringar told The Local on Wednesday afternoon that it had received around 1,300 reports of damage by customers hit by the strong winds – around half the number reported following a similar autumn storm ('Simone') in 2013.

“But we don't know the extent of the damages yet. We estimate that it's going to cost around 40-50 million kronor, probably closer to 50 million ($5.74),” said spokesperson Ingemar Helgesson.

A massive clear-up operation was still under way three days after the storm, named 'Gorm' by Danish meteorologists, toppled around 2.5 million cubic metres of forests in the Skåne, Blekinge, Halland and Småland regions, predicted to rack up a costly bill for authorities.

The figure beats the storm Simone (named 'St Jude' in the UK and 'Christian' in Germany), which tore through the same area on October 28th-29th two years ago, tearing down between 1.5 and 2 million cubic metres of forest.

However, both remain far behind Sweden's most powerful storm in the past decade, 'Gudrun', which laid waste to a whopping 75 million cubic metres when it swept through the country back in 2005.

WEATHER: Check the forecast for your parts of Sweden