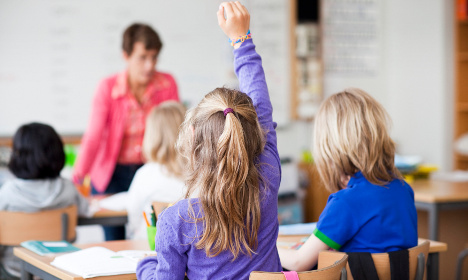 Swedish students can usually start university the year they turn 19. However, this week around 5,000 pupils aged between six and 14 unexpectedly received letters from Uppsala University declaring they had been accepted on to a degree course in teaching starting in the new year.

The formal letter had parents and children in Täby outside of Stockholm scratching their heads. But the head of education in the municipality quickly reassured families this was not an unusual scheme by the Swedish government to get more youngsters interested in the teaching vocation.

“Sure, our pupils in Täby are very talented and sure, there is a teacher shortage, but they should probably finish primary and secondary school first if they are to train as teachers,” Patrik Forshage told regional newspaper UNT after the story was shared on social media.

But the parents seemed unfazed by their children's admission to higher education.

“Siri, 7, is welcomed to the teaching course in Uppsala. To fill the seats they're apparently targeting the lower age brackets,” wrote one dad on Twitter.

The youngsters were supposed to have received letters welcoming them back to school after the Christmas holiday break. But gremlins at the printers responsible for producing both letters admitted the address list got mixed up with the prospective Uppsala students.

“This is of course nothing sent out by Uppsala University, but we have received quite a few calls about it,” Anna Hagborg, of the university's teaching faculty, told UNT.

“Some parents are concerned that it was a case of stolen identities, others saw it as a bit of fun and said things like 'Our daughter is just six years old, perhaps it's a bit too early to train to become a teacher?'”

The hopeful prospective teachers are set to receive their acceptance letters for the spring semester on December 9th, along with the rest of Sweden's new batch of university students. It was not known on Wednesday what would actually appear in their letter boxes.

Sweden has previously been told by the OECD to invest in teacher training after a decade of slipping results in schools and fewer people applying for university teaching courses.