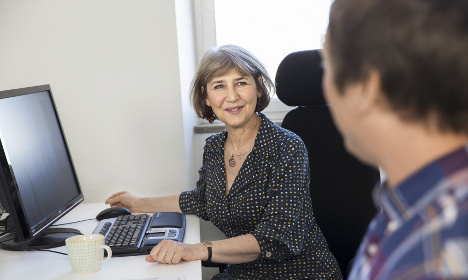 Choose your words carefully with your Swedish boss. Photo: Susanne Walström/imagebank.sweden.se
1. “No, thanks, I can’t stand coffee”
The Swedes take their coffee very seriously. Per capita, after the Finns, the Swedes are the second-largest consumers of coffee on the planet. They may not be a religious people but don't take the name of Java in vain. If you don't like it, well, you're going to have to lump it because the sacred ceremony of 'fika' (coffee and cake – dieters you must also abandon all hope) is celebrated at least twice a day. And you don't want your new Swedish boss to think you're not a team-player, do you? Tea drinker? Nope, it doesn't count. Time for a coffee? It's always time for a coffee. Photo: Janerik Henriksson/TT
2. “Where’s everyone gone? It’s only 5pm”
It's time to disentangle yourself from all your previous working practices. Take lunch. Have coffee breaks (see above). Go home on time. Many parents in the office will likely have already gone to pick up their kids from school at 3.30pm, so there might only be a skeleton crew left by 4.30pm. Don't be a hero, don't think that your boss will be impressed by the fact you're prepared to put an extra hour in. He or she won't. They'll just think you're a saddo with no friends or family. Where HAS everyone gone? Photo: Emma-Sofia Olsson/SvD/TT
3. “Is Mattias still on paternity leave?”
Mattias (or Tomas or Tobias, you get the picture) is almost certainly availing himself of the generous 16-month parental leave which can be shared out between mothers and fathers, with three months of that set aside specifically for each parent.
It's not an uncommon sight in Sweden to see a clutch of men pushing buggies round town centres before stopping off for an afternoon latte. Mattias might be your favourite colleague but you'll just have to chill out. You may not see him for a while yet. A father and child. Photo: Izabelle Nordfjell/TT
4. “A desk where you stand up? What’s the point of that?”
Standing desks have become commonplace in Sweden. There are few offices that don't have the option to at least share access to a standing desk. Their health benefits are obvious even if the choice may seem to be to sit at a desk and die early or stand at a desk and look stupid. That huge leather office chair you used to lust after, the one with the inbuilt drinks cabinet, that's a no-no. Stand up for your new Swedish boss. A standing desk. Photo: Henrik Montgomery/TT
5. “I am feeling rather sick but don't worry I'll come into work anyway”
UK and American bosses in particular are, in The Local's humble experience, not known for their high sympathy levels for sick workers. Most of them don't actually believe you are ill at all, but are calling in from the cocktail bar of a lavish hotel. Even if they do believe you, they would still rather you came in to slog through a few calculations on that spreadsheet before going home after an hour having spread your virus throughout the entire building.
The Swedish boss' mentality is much more sensible. Stay at home until you are well. Do not spread your illness. A sick worker is a liability, even if, when he or she's at home, they somehow manage to build a pirate ship from scrap materials (true story). Don't go to work if you're ill. Photo: Christine Olsson/TT
6. “I’ve never worked for a female boss before. How do I deal with the hormones?”
Sweden has more women in executive roles in business or politics than any other European country. Its position as one of the world's best nations to be a woman is therefore secure. It also means there's a very good chance that your new Swedish boss will be a female. So show some respect. And don't expect your male colleagues to laugh at any sexist jokes either. PS: Jokes about hormones will not be appreciated. Photo: Anders Wiklund/TT
7. “I don’t need any help with the report – I’ll just stay until 10pm to finish it off”

Get used to the phrase 'work-life balance'. You'll hear it a lot in Sweden. Swedes may not all be quite ready to graduate to six-hour working days, but the number of hours they work each week are among the lowest in Europe. Most people simply do not work that late, although more are starting to reply to work e-mails out-of-hours on their smartphones.

The Swedish workforce is all about cooperation too. There's no great scope to be a maverick – if you try to do it all yourself, you'll simply be frozen out. If there is a pressing deadline, everyone will be expected to work extra hours and muck in. All for one and all that. There's simply no need to try to be workaholic – it just won't get you anywhere.

And, if you thought that all this down-time, parental and sick leave, short hours and general civility would leave Sweden in the economic doldrums then you'd be mistaken – Sweden recently announced “crazy strong” growth figures.

Now, time for that coffee break… Don't bother working late. Nobody will thank you for it. Photo: Henrik Montgomery/TT