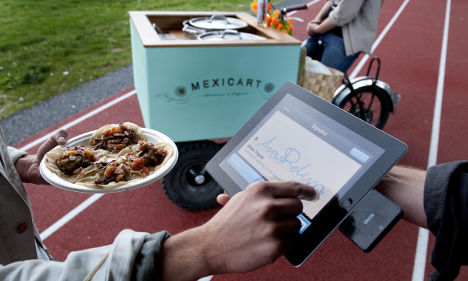 A payment made using iZettle and an iPad. Photo: Jonas Ekströmer/TT

iZettle, which launched in Stockholm just five years ago, developed the first credit card chip-reader that connects directly to mobile phones and tablets. The product was designed to help tech-savvy small businesses avoid the cost of till-based systems provided by banks.

The Swedish company has grown by a massive 30,114 percent over the last four years, according to Deloitte.

The list was topped by Catawiki, a growing online auction house based in the Netherlands, which saw its turnover increasing by 45,000 percent.

“Achieving a position in the EMEA Fast 500 is always an impressive feat but the rates of growth for this year are particularly inspiring,” said David Cobb, partner-in-charge of the Deloitte Technology Fast 500TM EMEA programme in a press statement.

“These results highlight the strength and determination of the Technology sector across this region with a clear indication of some of our business leaders of the future.”

Swedish Software companies Kaustik AB and Inteleon AB also reached the top 50 on the list, with a total of 37 of the full list of 500 companies in the ranking coming from the Nordic nation. This made Sweden the fifth best represented country.