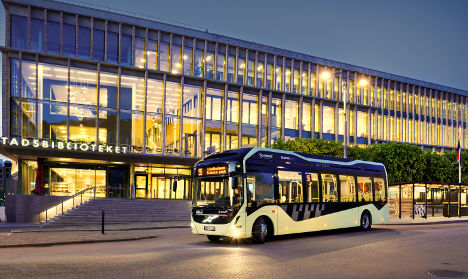 One of the electric busses in Gothenburg. Photo: Volvo
Some of the tech-savvy passengers are glued to their mobile phones, making the most of the free wifi and charging points, while others are watching an ice hockey game showing on the television screen on route 55.
There is minimal small talk on board this moving microcosm of Swedish stereotypes, just as in most major towns and cities. But here there are no noisy engines to mask the silence. The bus is run entirely on electricity. It's an experience so quiet that Volvo Group – the company behind the initiative – even managed to arrange surprise a capella performances from some of the Nordic country's top recording artists on services over the summer.
There are also no fumes wafting in through the doors when travellers hop on and off. The buses are entirely emissions free, pausing for just five minutes to charge their rooftop batteries in what Volvo Group describes as “the world's first indoor bus stop” at Gothenburg's Lindholmen Science Park.
“It's a cool way to help the environment (…) It's quiet and it's not as bumpy as the hybrid buses so it's great!” says Vilma Thoren, 17, a student in the city who is one of hundreds of regulars using the new form of transportation.
“I think it's good that Gothenburg gets involved with environmental questions and I think that these buses are one way to help develop a better future for our city.”

A bus being charged. Photo: The Local The outside of the indoor bus stop. Photo: The Local
These are not the first public electric buses on the planet, but since they got on the roads of Gothenburg in July they have grabbed plenty of global attention as part of the Fossil-Free Sweden initiative launched by the Social Democrat-Green coalition, designed to ensure the country becomes one of the world's first fossil fuel free nations by 2030. The government has asked Swedish companies, municipalities and cities to highlight their climate change efforts and to challenge those in other countries to do the same.
READ ALSO: Sweden pledges more money to tackle climate change
Volvo Group – along with the city of Gothenburg – has already been shouting especially loudly about its achievements, despite the fact that it continues to deliver more than 10,000 buses annually which still run purely on diesel or are hybrid vehicles.
However the company's Chief Sustainability Officer Niklas Gustafsson says the move is much more than a publicity stunt.
“We cannot afford to develop something that we only want to demonstrate (…) We are going only for electric and hybrid buses moving forward,” he told The Local during a conference for foreign journalists in the city last month, fully funded by the bus manufacturer.
Gustafsson, who also represents Volvo as co-chairman on the United Nations high level advisory panel on sustainable transport, said he would not consider the project to be a success until it had been rolled out on every continent. But he admitted that Sweden – with its famously green reputation – had been the obvious location for the Swedish company to test the initiative.
“If we were only showing off with an electric bus we could do it anywhere. But since this is a transport solution, then we needed some help from our friends and it's a bit easier to find those friends in Sweden (…) the city officials, the utility companies, the experts.”
Volvo has put 200 million kronor into the project, with Gothenburg City Council adding a further 19 million, alongside other major investments from the Swedish Energy Agency (Energimyndigheten), Chalmersfastigheter (a company working to manage and develop student housing) and Region Västra Götaland.
The company told The Local that the operating costs of the buses are far lower than those running on diesel, thanks to energy consumption that is 80 percent lower. But it said it was “hard to give an exact number” due to country variations in fuel prices.
An analysis conducted in collaboration between Volvo Group and the audit and advisory firm KPMG earlier this year estimated that a city with half a million inhabitants would save about 100 million kronor per year if all of its buses ran on electricity instead of diesel and lead to an annual reduction in carbon dioxide emissions totalling 33,000 tonnes.
Other major urban centres are clearly already buying into the idea. Volvo has just introduced eight more electric buses to its fleet in Stockholm (on the island of Lidingö and in several southern suburbs). The German city of Hamburg is also trialling two, while Luxembourg, Montreal and Bangalore among the other destinations scheduled to follow suit in 2016.

Passengers getting on an electric bus earlier this year. Photo: Volvo
The vehicle firm is currently brainstorming ways to make the best use of space in places using the buses, such as enabling them to drive into and get charged up at shopping malls, schools and public squares.
“We bring the buses closer to passengers. They can go to places where people actually want to go and where noise pollution is no longer an issue because they are so quiet,” says Jessica Sandström, head of Volvo Group’s city mobility programme.
“Why aren't they everywhere yet? That's what my kids ask me all the time!” she laughs.
Back on the streets of Gothenburg, while many acknowledge that the Swedish transport firm has clearly invested in some heavy-handed public relations tactics surrounding the vehicles, most locals appear genuinely pleased with the results.
“I support it and I actually think they should be talking even more about it,” argues 24-year-old resident Denise Janlof.
“Sweden can be a role model for other countries, we are already looked up to. But I also think a lot of people hear about things like this and then think 'this is enough'. I believe we also have to show more of what is wrong and what we need to do even better.”