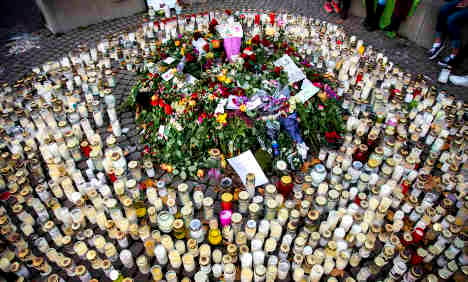 Candles left outside the school in October. Photo: Adam Ihse/TT

The man, 42, who was a mathematics teacher, was stabbed after he confonted 21-year-old Anton Lundin Petterson, a far-right sympathiser who walked into the Kronan school in western Sweden on October 22nd.

His death was confirmed by police speaking to Swedish media, including the TT news agency and the Expressen tabloid who reported that the man had died from his injuries at around 7pm on Thursday.

The lead investigator in the case, Thord Haraldsson, told TT on Friday that his team had only spoken to the teacher on Wednesday.

“We held a meeting and it went well. It was the first time we had had contact with him,” he said.

“It is a terrible tragedy that it came to this,” he added.

The teacher's wife gave an interview last month suggesting that her husband was on the mend, a month after losing consciousness following the attack.

“He was able to say a few words when he woke up. I asked him to say my name and he did,” his wife, named only as Samira, told the Aftonbladet tabloid last month.

She said that her husband Nazir had been receiving plenty of flowers and get-well messages from pupils.

“Yes, he is very popular. I tell him every time somebody gets in touch.”

Samira said that Nazir had been stabbed “in the bile duct, just a millimetre from the liver” and suggested that this had saved his life.

READ ALSO: 'We can't go out without our mums and dads now'

Thousands attended last month's funerals for teaching assistant Lavin Eskandar, 20, and Ahmed Hassan, 15, who were also killed in the school attack, the first in Sweden since the 1960s.

One other pupil was also hurt, but was was able to return home from hospital in November.

Police classified the attack as a hate crime after CCTV footage showed that Lundin Pettersson, who was shot by officers arriving at the scene, had selected his victims on the basis of their skin colour.