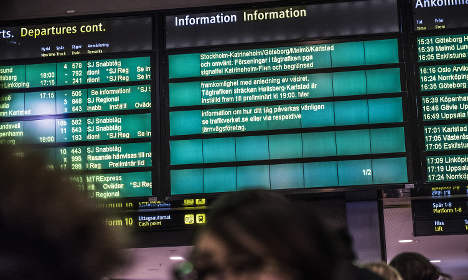 Swedish train operator SJ has cancelled services between Stockholm and Gothenburg as well as Oslo and Stockholm until at least 2pm Saturday, according to the Swedish newspaper, Aftonbladet.

Travel between Stockholm and Nyköping was expected to resume at noon and trains between Gothenburg and Karlstad will beging running at 6 pm.

He said the company would offer refunds to affected travellers.

55,000 households lost power in southern Sweden at the height of the storm, but by Saturday morning power company Vattenfall reported that the number had reduced to 7,400. Utility companies Eon and Ellevio reported a combined outage of roughly 8,000 households.

However storm caused few injuries. One person was hurt by scaffolding blown down by strong winds in Gothenburg and news agency TT reported that a firefighter was hit by a falling tree in Södertälje Municipality, just south of Stockholm.

The storm hit as a massive clear-up operation was still under way after Storm Gorm swept through southern and western Sweden last Sunday night, leaving a trail of destruction.