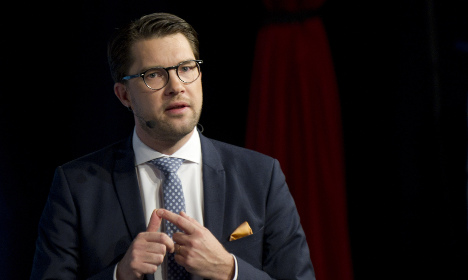 Åkesson said "What I do think is that if you have received a permanent residency permit for false reasons, then it should be reconsidered." Photo: Björn Lindgren / TT

Åkesson, whose nationalist party is anti-immigration made the comments during a programme on Swedish Radio.

Such a reason for revoking a residency permit, Åkesson suggested, would be someone lying about their identity.

Åkesson was also asked about the Sweden Democrats’ position in regards to Sweden's official immigration policy since the Social Democrats-led centre-left government coalition has recently taken a much harder line on asylum cases and border controls.

Åkesson refused to be drawn in to specifics but agreed that “the consensus among the other parties has been broken up now.”

His comments echo those made by party chairman Richard Jomshof at the SD’s conference at the end of November.

It’s not enough to shut the borders,” Jomshof, one of SD’s most powerful politicians, told Sweden’s Sydsvenksan newspaper at the time. “We should tear up the residency permits of those who have already been accepted.”

He argued that large numbers of asylum seekers, particularly those from Afghanistan, had been granted asylum “on incorrect grounds” and weren’t “true refugees”.

A week ago the Sweden Democrats polled 19.9 percent, the group's highest-ever projected share of the electoral vote in a survey by Statistics Sweden.

The rising support for the Sweden Democrats has taken place off the back off record immigration to the Nordic nation.

In October the Swedish Migration Agency doubled its refugee forecast for 2015, with up to 190,000 new arrivals expected on Swedish soil over the whole of 2015.

However according to the agency, the number of refugees arriving dropped by 30 percent after the country reinstated border controls in southern parts of the country in mid-November.