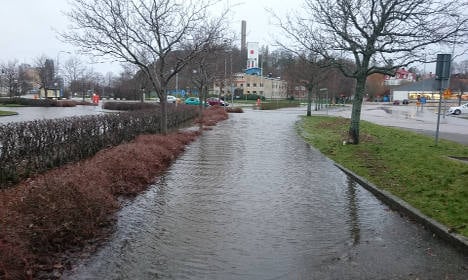 The peak of the high water levels is unlikely to hit tomorrow but the Uddevalla Bridge, 85km north of Gothenburg, has been closed and rail services on many routes have been suspended as the tail of Storm Helga continued to plague the region.

There is a threat of flooding for parts of Vastergotland and Halland.

“We have not seen a peak yet. We expected it today or perhaps tomorrow but the highest levels have not yet come,” Henrik Spångmyr, duty meteorologist at weather institute SMHI told the Swedish news agency, TT.

Railway services in large parts of Götaland, and some southern of Svealand, have been suspended.

Services on the Varberg-Boras-Herrljunga route are not expected to open until Friday, according to the Swedish Transport Administration. Part of the embankment is under water and power failures have been reported.

Guests at a hotel in Lilla Edet, Thorskogs Castle, had to be evacuated.

“There are warnings for very strong winds over the north west Götaland and also on Gotland,” said Therese Fougmark, meteorologist at SMHI.

Vattenfall announced that around 2000 customers in Östergötland, Södermanland and Örebro County are still without power after Storm Helga's rampage across Sweden.

Storm Helga hit as a massive clear-up operation was still under way after Storm Gorm swept through southern and western Sweden on Sunday night, leaving a trail of destruction.